Bieber-mania aside, Justin tries to be a normal kid 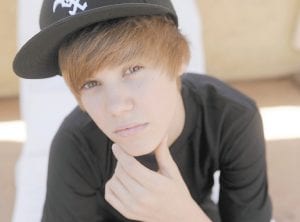 When you’re a 16-year-old pop star who jets around the world, hangs out at the White House, gets chased by hysterical girls on the regular — and maintains the most perfectly coifed hair in the universe — it’s hard to be a typical kid.

During a recent interview, he talked about setting up time to spend with a friend. Except unlike other kids bumming around town, Justin will be flying out his buddy to spend the weekend in a plush hotel, and will hang with him only after he’s done with the myriad of responsibilities that befall the hottest entertainer on the planet.

“I try to spend as much time with my friends and just be a regular kid as I can on top of work,” says Justin.

Of course, being a regular kid when you are arguably the most popular commodity in entertainment is a near impossible task. It seems as if the world has been engulfed in Bieber-mania: The You- Tube phenom-turned-superstar has graced the cover of People, had appearances on “The Oprah Winfrey Show,” ‘’Saturday Night Live” and “The Ellen DeGeneres Show,” been a guest at the White House and sold more than a million copies of his debut album, “My World 2.0.”

He poses for photos with Kim Kardashian and starts a frenzy on Twitter. (“Seriously Biebs,” she posted, “I’m getting death threats from your fans.”) He’s friends with the Jonas Brothers and Jaden Smith, and counts Usher as his professional mentor.

It’s hardly kid stuff. But you won’t hear many complaints about it from Justin, who figures he’d “probably work at McDonald’s or something” if he wasn’t preoccupied with being a global sensation.

“People ask me, ‘Do you wish having a regular life?’ And I’m like, ‘You know, not really.’ … Just regular people, they’re like, ‘Maybe I want to be famous,’” reasons Justin. “They want to be famous. Sometimes I want to be just regular, just hanging out or whatever. There’s ups and downs to everything.”

There haven’t been many public downs for the young Canadian since his meteoric rise. He first got noticed with his homemade videos on YouTube, which have collected millions of views. In one, he sang a cover of a Chris Brown song — closing his eyes, moving with the music, his voice clear and strong, with posters of Bart Simpson and Tupac Shakur visible on the wall in the background.

It didn’t take long for the music industry to notice — interest was so high that both Usher and Justin Timberlake battled to sign him to their respective labels, with Usher winning out. (The battle is an ofttold story: Bieber is so famous now that even his fairy tale rise has become part of pop folklore.)

His down-home charm is both authentic and intentional — and possibly critical to his continued success. His 28-year-old manager, Scooter Braun, used YouTube to build Bieber’s fan base for months after signing him.

“We gave it to them through the mediums they knew were real,” he says. “That’s why these kids feel an ownership in him.”

But these days, little about Justin’s life is organic, and hardly resembles that of his teen and ‘tween fans. He doesn’t go to school and instead has a personal teacher who travels with him as he zigzags around the globe and hobnobs with the A-list.

“It’s kind of hard to balance school and work sometimes,” he confesses. “But sometimes, like, if I’m going to the White House and I’m in there doing a tour and stuff , that’s like school.”

Braun says allowing Justin to be a teenager is an important part of the business plan.

“At least one day a week, we do not travel, we don’t do anything, we have fun,” says Braun of Justin, an only child who is usually accompanied by his mother and a security guard. “He’s a kid. We let him be a kid.”

But Braun, who describes his relationship with his client “like a nephew or a son,” also says he’s there to help Justin through that usually awkward transition from teenager to adulthood.

Usher, who successfully made the jump from teen star to adult superstar, agrees.

“He’s a talent that’s going to continue to blossom, because he has guys like myself in his corner,” he says. “One advantage is a lot of what Justin is dealing with and approaching, I’ve dealt with. I understand it. We all have our windows in life, and I want his window to last for a very long time.”

For his part, Justin says he would love a career like Michael Jackson, who was a textbook example of what can happen to child stars — for both good and bad.

Braun says he shows him examples of where child stars went wrong, so he can “learn from people’s failures than their successes.”

There don’t seem to be any warning signs to concern Bieberwatchers. And Bieber said he’s not worried about ending up like Jackson, because the King of Pop didn’t have a childhood, starting his entertainment career around the age of 5.

Braun and Usher aren’t the only ones thinking about his future, either. Justin has already thought about what he wants to do, and besides singing, hopes to segue into acting.