Big Brown looks to be best of Derby field 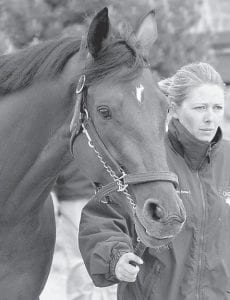 “He’s the fastest horse in the race,” Dutrow says of his Florida Derby winner, who has won his three races by a combined 29 lengths. “We’re the horse to beat and I feel confident that we’re going to win the race.”

Dutrow might be right, but Big Brown will have to overcome more than a full field of 20 3-year-olds at Churchill Downs. The chestnut colt will try to buck history as well: The last Derby winner with just three races going into the Run for the Roses was the filly Regret in 1915. Last year, eventual Horse of the Year Curlin attempted the feat and finished third.

“We’re just concentrating on our horse, trying to get him to the races as quickly as possible the right way,” he says of his colt, who has troubled front hoofs. “It looks like we did.”

Winning, though, is another story.

“I got Curlin beat in this race last year, so I know how hard it is to win,” says trainer Steve Asmussen, who will try again with Pyro and Z Fortune.

Despite more than 30 Derby prep races since January – on dirt, turf and synthetic surfaces – a standout failed to emerge among more than 450 horses nominated for the Derby and the other Triple Crown races, the Preakness and the Belmont Stakes.

This year, the track surface has become an issue in trying to sort out who’s for real and who isn’t.

Colonel John, winner of the Santa Anita Derby, is the best in the West and deserves to be among the favorites with four wins and two runner-up finishes in six races. However, trainer Eoin Harty’s colt has run all his races on synthetic surfaces. Colonel John arrived at Churchill Downs last week to get acclimated to the dirt.

Gayego made a smooth transition, winning the Arkansas Derby in his first race on the dirt.

And then there’s Pyro, who probably would have been the favorite if not for a 10th-place finish in the Blue Grass on Polytrack following explosive finishes in winning the Risen Star and the Louisiana Derby on dirt. The colt also won at Churchill Downs in his career debut.

“I feel fine with Pyro coming from the synthetic to the dirt,” Asmussen says.

Last year, Street Sense became the third favorite since 2000 to take the Derby, a marked improvement over the previous two decades. Spectacular Bid’s victory in 1979 was the last by a Derby favorite until Fusaichi Pegasus prevailed in 2000.

That’s what gives hope to every other Derby contender, and it’s why trainer Todd Pletcher heads to Louisville optimistic with his two late qualifiers, Blue Grass winner Monba and runnerup Cowboy Cal.

Monba, considered Pletcher’s top Derby prospect early in the year, finished last in the Fountain of Youth Stakes two months ago before his win on Polytrack, while Cowboy Cal’s three wins in six starts have come on turf.

“I’m comfortable that we are bringing two of the right kind of horses that are stoutly bred, have stamina in their pedigree and are improving at the right time of year,” says Pletcher, who is 0-for- 19 in the Derby but won his first Triple Crown race when the filly Rags to Riches captured the Belmont Stakes last year. “We’re optimistic, but we also have tremendous respect for how hard this race is to win.”

If more than the maximum 20 horses are entered, preference will be given to horses with the highest graded-stakes earnings.

If jockeys enter into the equation, consider Edgar Prado. The newly elected Hall of Fame jockey had several Derby options and chose Lane’s End Stakes winner Adriano. The rider who guided Barbaro to victory in the 2006 Derby also won the Wood Memorial aboard Tale of Ekati and the Blue Grass with Monba.

“In the Derby, just about anything can happen,” says Harty, a former assistant to three-time Derby winner Bob Baffert. “So I’m scared of them all.”

Post time for the 104th running of the Kentucky Derby at Churchill Downs in Louisville is 6:04 p.m., on Saturday, May 3.