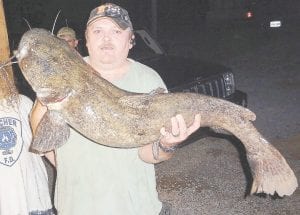 Randy Isaac of Jackhorn caught this large flathead catfish on Saturday (July 21) at Breaks Interstate Park. Isaac had to call on family and friends who made the trip with him to help get the fish out of the water and up an embankment. The big catch measured a little over 45 inches long, but Isaac had no scales to weigh the fish since he wasn’t expecting to catch one of its size. The flathead was returned, unharmed, back into the water. It is Isaac’s biggest catch to date, but he plans to continue to pursue a larger one. Flathead catfish are the second largest species of catfish, next to the blue catfish, in the United States and can grow to weigh more than 100 pounds.