Big dog drags newborn away from home in Nicholasville 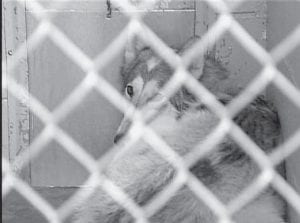 In this image from video provided by WKYT-TV in Lexington, Dakota, a 4-year-old Native American Indian dog, a breed that looks similar to a husky, is shown in her cage after she was taken into custody by animal control. The dog carried 4-day-old Alexander James Smith from his crib to the family’s heavily wooded backyard in Nicholasville on Monday, critically injuring the infant. (AP Photo)

A father was frantically calling 911 to report his missing newborn when he spotted the baby, bleeding from the mouth and clutched in the jaws of a family dog who had carried him from his crib to the heavily wooded backyard.

Four-day-old Alexander James Smith was rushed to the emergency room at University of Kentucky Hospital in Lexington, where he was listed in critical condition Tuesday with two collapsed lungs, a skull fracture, broken ribs and various cuts and bruises.

His father, Michael Smith, said doctors were optimistic the boy would survive, but a day earlier they braced the family for the worst and had to use resuscitation paddles to get a heartbeat.

“They took us straight to a consulting room with a pastor and gave us pretty much what was the last visitation,” Smith said in an interview with The Associated Press from a hospital waiting room.

Smith said he and his wife, Chrissie, had just put Alexander James (or A.J.) in his crib Monday afternoon in their Nicholasville, Ky., home. Smith said he was preparing to leave for the store to buy various baby items, including a video monitor that he now believes could have prevented the entire ordeal.

“It’ll haunt me because that was my job,” he said. “It’s a nightmare.”

When Chrissie returned to the bedroom minutes later after going downstairs to look at the shopping list, one of the doors was ajar and both the baby and their Native American Indian dog — a breed that looks similar to a husky — were gone.

Michael Smith initially headed to the backyard, knowing that Dakota, a mixed breed with wolves in its ancestry, had a reputation for stealing household items like cups and wallets and depositing them there. He spent 10 minutes searching among the trees and bushes in the two-acre fenced yard before finding the dog and child in tall grass some 200 yards behind the house.

He grabbed his son and sprinted toward the house, handing him over to emergency workers who had just arrived.

“When you’re running through the backyard and you can’t find him, every worst fear comes through your head,” Smith said. “We had to try to stay positive, try and find him. My guess is five more minutes and he wouldn’t be here.”

Jessamine County chief deputy sheriff Allen Peel said no charges had been filed, but the case remains under investigation.

Smith, who is the owner of a corporate security business where his wife also works, said the dog was treating the baby as a puppy and wasn’t being vicious. Still, he doesn’t want her back in the family home.

Dakota was taken into custody by animal control, and although Smith remains hopeful a good home can be found for her, he acknowledges the animal may have to be destroyed.

A call to Jessamine County animal control was not immediately returned.

The 4-year-old dog was one of three — including one from the same litter as Dakota — that the family had owned since they were puppies. None had any history of aggression, even when playing with Smith’s two other children from a previous marriage, he said.