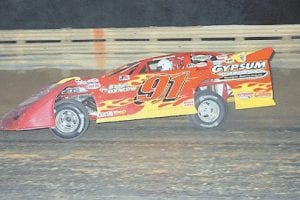 We recently had the chance to speak with Ritchie Lewis, director for the growing and highly respected Lucas Oil Dirt Late Model Series. Lewis, 43, is the former UDTRA/Hav-A-Tampa Series Race Director, and took the reins of the Lucas Race Series in May 2007.

LEWIS: Growing by 10 races this year is probably the best indicator of success. As for the series, we all feel it’s the premier late-model dirt series in America. We impact a huge geographic area, and our roster of drivers includes the cream of the crop from all walks of short-track racing.

ZYLA: How about the engine rules, or should I say lack thereof?

LEWIS: We are an “Unlimited Late Model” series in that we allow a very exotic engine with no cubic-inch limit. Our rule package is simple: one carburetor, one intake, and one spark plug and two valves per cylinder. The engines make 800 to 900 horsepower, and our cars are extremely fast.

ZYLA: How about tires? LEWIS: We allow Hoosiers and American Racers, and we’ll limit the compounds based on what is usually run at a specific track. It helps keep the cost down on what is one of the most expensive costs in racing when you run dirt. We change the tire-compound rule from track to track to keep the local late-model racer from having to go out and buy new tires to run with us.

ZYLA: Let’s talk the importance of auto racing as an entertainment value in times of recession. What are your opinions?

LEWIS: It all comes back to auto racing being an entertainment value, for sure. All people, not just race fans, have “X” number of choices and dollars per year to spend on entertainment, and everyone in the entertainment industry is trying to capture a portion of that dollar. So, at the end of the day, racing promoters are not just competing against each other and different forms of motorsport, they compete against Hollywood, baseball, football, concerts, fairs and festivals. We must bring value to the table at the short track and make it a great show, as everyone looks for a solid return on investment.

ZYLA: And the fan?

LEWIS: Always should be first and foremost. The fan pays at the gate and sits in the stands. The fans buy the bulk of the hot dogs, refreshments and T-shirts. The fan is the beginning of what I’ll call our “feeder chain.” Without the race fan, there wouldn’t be any growing, organized racing … anywhere.

ZYLA: Some people still say that if you drop below the Mason Dixon line into the South, the popularity of late model racing doubles. Do you agree?

LEWIS: No, not anymore. It used to be that way, but I feel it’s changed for the better. When you look at drivers like a (Tim) McCreadie (RCR development driver) with ties to northeast Modified racing, or a Billy Decker (another northeast hotshoe), or a late-model standout from Pennsylvania, where we have a race, by the name of Rick Eckert, it proves times have changed. You’ll also see us run in the Carolinas, Tennessee, Missouri, Arkansas, Mississippi, Illinois, Ohio, Kentucky, West Virginia, Georgia, Indiana, Florida and Maryland.