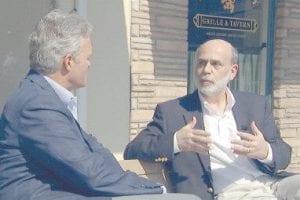 “60 Minutes” has thrown a few haymakers in recent weeks: the first interview with hero pilot Chesley Sullenberger; a longsought talk with Federal Reserve Chairman Ben Bernanke; and a sit-down with President Obama.

It’s paying off where it really counts in the world of television: The CBS newsmagazine has emphatically reversed a long, nearly unbroken decline in viewership this season with a sharper focus on the news stories that define the day.

“We stand on the shoulders of giants,” correspondent Scott Pelley said, “but I dare say this program has never been better than it is right now.”

In an office where the sense of history and pride is palpable — Executive Producer Jeff Fager has Emmy Awards on the floor because he’s run out of shelf space — some of his colleagues weren’t ready to go as far as Pelley. But they do think “60 Minutes” was wise in how it has dived into stories about the economy and wars in Iraq and Afghanistan.

This season, the program is averaging 15 million viewers an episode on Sunday nights, according to Nielsen Media Research. If it holds up, it will be the largest average audience for the show since the 2000-01 season. Since the 1997-98 season when nearly 20 million people watched the show each week, the viewership has declined each year, except for a brief blip in 2003.

“It’s a reflection of Americans’ appetite for important stories and understanding of them, and I also think that’s what we do well,” Fager said. “We’re good at it, and we’re doing more of them.”

Much of the ratings success can actually be attributed to Obama, as a postelection interview with his kitchen Cabinet and one with the president-elect did extremely well. Obama appears to have a solid relationship with Steve Kroft, who has interviewed him three times at length this TV season.

Fager, in his fifth year as the successor to show founder Don Hewitt, has pushed to be more on top of the news. It was a small culture change for the correspondents, who were inclined to report more timeless stories to build up a bank of them.

Another subtle shift was the appointment of Michael Radutzy to lead a team of producers, retreating from the show’s traditional structure where individual correspondents had their own production teams.

Fager is more pro-active in shaping the shows than Hewitt, who was “a little bit more seat-ofthe pants,” Kroft said.

“He’s a little bit more oriented toward breaking news than Don was,” Kroft said. “But this was an unusual year. You couldn’t have ignored the news and I don’t think Don would have.”

The show has done many stepback stories on the economy, including Kroft’s explainers about credit default swaps and Wall Street financial instruments. Lesley Stahl profiled Rep. Barney Frank, chairman of the House FinancialServices Committee, and Pelley reported on foreclosures and an Ohio town hit hard by the financial meltdown.

Pelley pursued the Bernanke interview for a year, trying to work the financial chief past his reluctance.

“I come from the hard news side of CBS News and I miss the days of crashing stories for the broadcast,” said Pelley, using industry slang for fighting a deadline. “Now we’re doing that pretty regularly.”

Pelley’s interview with Bernanke drew nearly 13 million viewers earlier this month while “Dateline NBC” at the same time had 4.3 million people watching Olympian Michael Phelps tell Matt Lauer about being photographed smoking marijuana. In a less serious time, those numbers might have flipped.

Fewer television news outlets are doing the type of stories that “60 Minutes” is, and the lack of competition has worked in the show’s favor.

“There are fewer newsmagazines and more news,” he said. “That’s been kind of a lucky convergence.”

“60 Minutes” has sharply cut back on celebrity features, with Fager reasoning that with so many other outlets in that business it’s hard to be distinctive.

But he’s not beneath some oldfashioned hucksterism. Kroft’s profile on Coldplay was timed to run the night CBS broadcast the Grammy Awards. Fager’s also taken some heat for scheduling sports-oriented features, such as a profile of University of Southern California head football coach Pete Carroll, on nights that “60 Minutes” follows an NFL game.

“60 Minutes” hasn’t been immune to the economic troubles; there’s some question about whether the show will make less money for the network even with better ratings.

Bob Simon is wrapping up a trip to Africa, where he’s reporting on the elephant population — just the sort of trip few network news programs would take these days. He’s also working on a story about AIDS while there; if a correspondent plans an exotic trip, it’s best to come back with more than one story, Fager said.

While everyone has been asked to be mindful of expenses, Kroft, who has been on “60 Minutes” for almost 20 years, said he has never had a story idea turned down for economic reasons. He thinks it has been a year for viewers to rediscover the show.