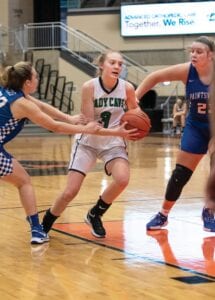 Jenkins High’s Emma Stewart had a breakout game in the opening round of the 15th Region All-A Girls Basketball Tournament against Paintsville. Stewart, a freshman, led all scorers with 21 points in the 58-46 loss at Appalachian Wireless Arena. That total followed a nine-point performance by Stewart in her team’s season opener against Johnson Central a night earlier. The Lady Cavaliers had a 1-2 record on the season before hosting district foe Pikeville Tuesday evening. (Photo by Chris Anderson)