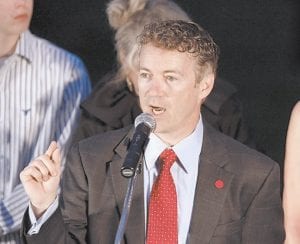 Party-switching Sen. Arlen Specter fell to a younger and far less experienced rival in the Pennsylvania Democratic primary, and political novice Rand Paul rode support from tea party activists to a rout in Kentucky’s Republican primary on Tuesday, the latest jolts to the political establishment in a tumultuous midterm election season.

In another race with national significance, Democrat Mark Critz won a special House election to fill out the term of the late Democratic Rep. John Murtha in southwestern Pennsylvania. The two political parties spent roughly $1 million apiece hoping to sway the outcome there, and highlighted the contest as a possible bellwether for the fall when all 435 House seats will be on the ballot.

On the busiest night of the primary season to date, Arkansas Democratic Sen. Blanche Lincoln was forced into a potentially debilitating June runoff election against Lt. Gov. Bill Halter in her bid for nomination to a third term. Rep. John Boozman won the Republican line on the ballot outright.

Taken together, the evening’s results were indisputably unkind to the political establishments of both parties — with more contested primaries yet to come, particularly among Republicans.

But any attempt to read into the results a probable trend for the fall campaign was hazardous — particularly given Critz’s victory over Republican Tim Burns to succeed Democrat Murtha in Congress.

Specter, seeking his sixth term and first as a Democrat, fell to two-term Rep. Joe Sestak, who spent three decades in the Navy before entering politics. Sestak was winning 54 percent of the vote to 46 percent for Specter. He told cheering supporters his triumph marked a “win for the people over the establishment, over the status quo, even over Washington, D.C.”

Sestak’s campaign calling card was a television commercial that showed former President George W. Bush saying he could count on Specter, then a Republican, and then had Specter saying he had switched parties so he could win re-election. Once unleashed, it coincided with a steady decline in Specter’s early lead in the polls and signaled the end of the political line for the most durable politician of his generation in Pennsylvania.

Former Rep. Pat Toomey won the Republican nomination and will run against Sestak in the fall in what is likely to be one of the marquee races in the battle for control of the Senate.

Among Republicans, Paul’s victory over Secretary of State Trey Grayson was a rebuke to the GOP Senate leader, Mitch Mc- Connell. McConnell recruited Grayson to the race after pushing the incumbent, Sen. Jim Bunning, into retirement out of concern that he would lose the seat to the Democrats.

Kentucky marked the third time that tea party activists, a collection of disparate groups without a central political structure, have placed their stamp on Republican races.

Their votes at a Utah Republican convention helped deny a spot on the ballot to Sen. Bob Bennett, a conservative judged as not sufficiently so. And their backing helped propel one-time longshot Republican Marco Rubio to a lead in the pre-primary polls in Florida’s Senate race, prompting Gov. Charlie Crist to quit the party and run as an independent.

Before Specter’s defeat, West Virginia Democratic Rep. Alan Mollohan was the only incumbent in his party to lose a primary.

Preliminary vote totals suggested turnout was larger than in 2006, the last non-presidential year. But changing circumstances — the presence or absence of contested primaries — make comparisons difficult.

Paul celebrated his triumph in an appearance before supporters.

“I have a message, a message from the tea party, a message that is loud and clear and does not mince words: We have come to take our government back,” he said, a 47-year-old eye surgeon making his first run for office.

He opponent in the fall will be Jack Conway, the Kentucky attorney general, winner over Lt. Gov. Daniel Mongiardo in the Democratic primary.

But the same energy that helped Paul to victory presented problems to be handled carefully by the Republicans in the run-up to November, when control of both houses of Congress will be at stake.

Paul has said he might not support his fellow Kentuckian, McConnell, for a new term as party leader. And no sooner had Tuesday’s results been posted than Richard Viguerie, a longtime conservative warrior, suggested McConnell step aside.

The far-flung races took place a little less than five months before the midterm elections. President Barack Obama backed incumbents in his party’s races, but despite the stakes for his legislative agenda the White House insisted he was not following the results very closely.

High unemployment, an economy just now emerging from the worst recession in generations and Congress’ decision to bail out Wall Street giants in 2008 all added to voters’ unease, polls said. In a survey released shortly before the polls closed, ABC said voter expectations for the economy had turned optimistic for the first time in six years. At that, only 33 percent of those polled said so in the network’s polling, compared with 29 percent saying the opposite.

In Kentucky, Paul had 59 percent of the vote to 35 percent for Grayson.

Paul countered Grayson’s establishment support with endorsements — and the political energy that flowed along with them — from tea party activists, former Alaska Gov. Sarah Palin and Sen. Jim DeMint of South Carolina, a conservative eager to push his party rightward in advance of the broader fall campaign.

On his website, Paul, 47 and an ophthalmologist, calls himself a “career doctor, not a politician.” He favors a balanced budget and paying off the national debt over time, but the website mentions no specifics.

He opposes all federal bailouts of private industry and government subsidies for alternative energy sources such as solar and wind power.

He has called Washington lobbyists a “distinctly criminal class” and favors banning lobbying and campaign contributions by anyone holding a federal contract exceeding $1 million.

Eager to avoid long-term fallout from a bruising primary, GOP leaders in Kentucky set a unity breakfast for Saturday.

The far-flung primaries took place a little less than five months before midterm elections in which Republicans will challenge Democrats for control of both houses of Congress. President Barack Obama backed incumbents in his party’s races, but despite the stakes for his legislative agenda the White House insisted he was not following the results very closely.

In Arkansas, the Democratic Senate race took on trappings of a clash of outside interests. Records on file with the Federal Election Commission showed outside groups had spent nearly $10 million to sway the outcome.

Lincoln positioned herself as an independent-minded Democrat not beholden to her party. Halter’s campaign was backed by labor unions unhappy with Lincoln’s opposition to a government option under health care, legislation making it easier for unions to organize and trade legislation. Little Rock businessman D.C. Morrison also ran.

As if primaries weren’t enough, both parties had other concerns.

Rep. Mark Souder, a conservative Republican from Indiana, abruptly announced he would resign on Friday, admitting he had had an affair with a woman on his congressional payroll.

And Democrat Richard Blumenthal, the Connecticut attorney general running for the Senate, disputed a newspaper report that he lied about having served in Vietnam.