‘Big push’ now on for midwives 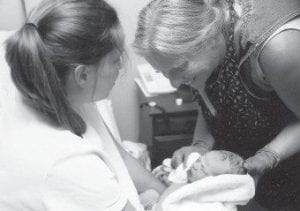 In this photo provided by Kevin Smith, mother Michelle Smith, left, holds newborn Wilder Smith as midwife Jane Crawford Peterson assists. With health care costs high on the national agenda, advocates of home births are challenging the medical and political establishment to give midwives a larger role in maternity care and to ease the state laws that limit their out-ofhospital practice. (AP Photo)

With health care costs high on the national agenda, advocates of home births are challenging the medical and political establishments to give midwives a larger role in maternity care and to ease the state laws that limit their out-of-hospital practice.

Pending bills to further this goal have significant backing in several states, which home-birth supporters want to add to the 25 states that already have taken such steps.

Nationally, a group called the Big Push for Midwives marked President Barack Obama’s inauguration with an e-mail campaign urging him to ensure that midwives who specialize in home births are included in deliberations on federal health care reform.

“We’re at a tipping point now,” said Katherine Prown, the Big Push campaign manager. “Home births are still only a small part of the total, but it’s poised for growth.”

The campaign seeks to emphasize that in this time of economic crisis, home births can be a safe, satisfying and moneysaving option for many women. But it runs into adamant opposition from the American Medical Association and the American College of Obstetricians and Gynecologists.

“Childbirth decisions should not be dictated or influenced by what’s fashionable, trendy, or the latest cause celebre,” the obstetricians’ policy statement says. “Despite the rosy picture painted by home birth advocates, a seemingly normal labor and delivery can quickly become life-threatening for both the mother and baby.”

According to the latest federal data, there were only about 25,000 home births nationally in 2006 — most of them assisted by midwives — out of nearly 4.3 million total births.

Midwife-attended home births increased by 27 percent between 1996 and 2006. Home-birth advocates believe the numbers will rise as more states amend their laws to accommodate the practice, which they contend is at least as safe as hospital births for healthy women with low-risk pregnancies.

One of the strengths of the state-by-state campaign is its diversity, Prown said.

“We’re one of the few movements that’s succeeded in bringing together pro-life and pro-choice activists, liberal feminists and Christian conservatives,” she said. “In every state we manage to recruit Republican and Democratic co-sponsors who normally would never be on the same bill together.”

The states are now evenly split on legal recognition of certified professional midwives (CPMs) — those who lack nursing degrees and who account for most midwifeassisted home births.

Half the states have procedures allowing CPMs to practice legally — including five which have taken such steps since 2005. The other 25 states lack such procedures and CPMs are subject to prosecution for practicing medicine without a license.

Depending on legislative decisions, the balance could shift this year. Among the battlegrounds:

—In North Carolina, a House study committee recommended in December that the legislature develop licensing standards for CPMs. The committee said the current system doesn’t meet the needs of women who chose non-hospital births because of the “extremely limited supply” of obstetricians and nurse-midwives offering to handle such births.

— In Idaho, advocates who failed previously to get a voluntary licensing bill through the legislature are back with a mandatory licensing bill. State Rep. Janice McGeachin, R-Idaho Falls, says the changes helped persuade the state boards of nursing and pharmacy to drop their opposition. The Idaho Medical Association, which fought the earlier version, has expressed respect for the changes in the bill and is deliberating on whether further changes might produce a version it could accept.

— In Illinois, advocates also are back with a new version of a licensing bill that failed in 2007. Rep. Julie Hamos, D-Evanston, says it toughens qualification standards for CPMs — changes that prompted the Illinois Nurses Association to drop its opposition. The Illinois State Medical Society remains opposed.

“There are many in the legislature who feel a need to have this option — they need to be educated,” said Dr. Shastri Swaminathan, the society’s president. “We’re in strong opposition to licensing midwives who don’t have the medical training to provide safe home births.”

Cost is a major element in the debate. A routine hospital birth often can cost $8,000 to $10,000, with higher bills for cesarean section deliveries that now account for 31 percent of U.S. births.

Midwives’ fees for home births are often less than a third of the hospital cost, in part because the mothers generally don’t receive epidural anesthesia or various other medical interventions at home.

For pregnant women, insurance coverage can be a decisive factor in their choice. Many insurers cover care by nurse-midwives in hospitals; coverage is less common for midwives who aren’t nurses or who assist with home births.

Many obstetricians acknowledge that the spiraling cost of maternity care and high rate of C-sections are problems.

“But the answer is not to have births at home,” said Dr. Erin Tracy, an obstetrician at Massachusetts General Hospital in Boston. “We obviously support women’s empowerment, but the No. 1 guiding principle has to be the health and safety of the mother and baby.”

The American College of Nurse-Midwives, which represents these midwives, says it differs from the AMA in considering home births a legitimate option for pregnant women. But the college says only nurse-midwives or others with comparable training should be allowed to assist.

“We don’t believe it’s safe without being integrated into the full health care system,” said Melissa Avery, the college’s president.

The education standards endorsed by the college would exclude many of the estimated 1,400 certified professional midwives, who often acquire training through apprenticeships.

Jane Peterson of Iola, Wis., is an example. She began a midwife apprenticeship in 1980 and has attended more than 1,330 births since then, many of them before she and her counterparts were legally authorized to practice under a 2005 state law.

Peterson, 56, said she strives to develop collaborative relations with local doctors so that transfers to hospitals go smoothly if risk factors develop. She believes such cooperation should be encouraged nationwide, so more women can feel comfortable about choosing home births.

“People will tell you that you changed their lives,” said Peterson, reflecting on the rewards of her job.

“It’s hard work — getting up on a cold winter night, going out one more time through the snow. What keeps you going is the recognition women feel — as though they are a different kind of mother when they’ve been able to give birth their way.”