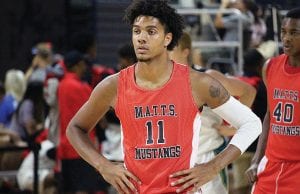 Kentucky commit Dontaie Allen of Pendleton County is a prolific scorer but also a willing passer.

How does Kentucky stand with bowl officials with five regularseason games remaining?

The Cats are 6-1 after last week’s win over Vanderbilt with road games left at Missouri, Tennessee and Louisville along with home games against Georgia and Middle Tennessee.

One bowl official — who can’t be identified because of bowl regulations — says Kentucky is a wanted team by big-time bowls.

“The Citrus Bowl guys (in Orlando) really want UK. I know the Outback Bowl (in Tampa) does, too, but Citrus gets first choice between those two,” the bowl official said. “If the Cats lose two more games, I still think that would make them a very likely pick for the Citrus.

“Should they somehow only lose one more I think the Chickfil-A Bowl in Atlanta is the most likely. Should they beat Georgia and hold on to win the East I think Chick-fil-A is almost a lock.”

He also said two teams UK has already played — South Carolina and Texas A&M — are being talked about a lot. South Carolina is a team the Gator Bowl in Jacksonville (what was known as the TaxSlayer Bowl) wants if it finishes the season in impressive fashion even though Texas A&M’s recent play has vaulted the Aggies into consideration for that bowl as well.

Stafford is the Nicholas County middle school boys’ head basketball coach and assistant high school coach. Allen plays for Pendleton County and will be signing with the University of Kentucky next month after giving his verbal commitment to coach John Calipari in the summer almost immediately after he was offered a scholarship.

“The first time I thought he would be really special was in the freshman district tournament against Nicholas County. He was a seventh-grader and put on a show,” Stafford said. “The next year as an eighth-grader he played a huge part in Pendleton beating Harrison County for the 38th district championship. After that I believe everyone knew he would be a special player.”

None of that really surprised Stafford after watching Allen for the last five years.

“I think what has been the most impressive to me is his ability to make his teammates better. He is very unselfish for a player that can score at will. He passes just as good as he can score,” Stafford said.

Yet despite those numbers and bevy of scholarship offers, Stafford says one of the best words to describe Allen is humble.

“For a kid with his talent, you don’t see the trash talking, the attitude. He is very quiet,” Stafford said. “He has always been polite to the coaches on the Nicholas staff. He does his talking on the court.”

Allen admits one of his role models when he was young was Mason County’s Darius Miller, another 10th Region player who went to UK to play and is now in the NBA. Stafford says Allen’s signing with UK is a sense of pride for the entire region.

“I’m excited. I think nowadays to say you coached against a player going to one of the most dominating schools in college basketball is rare,” Stafford said. “Now do we want to beat him when he comes to our place on Dec. 4, yes we do. I think coaches will want to do their best to stop him but when all said and done every 10th Region coach will want him to succeed at UK.”

Stafford feels Allen needs to improve his outside shot and strength even more before getting to UK even though he quickly notes Allen’s shot has “improved greatly” the last few years.

“When he is hitting, you watch out. He is hard to stop,” Stafford said. “He has always been small framed but I believe when he hits campus that will change. With what UK has done to the likes of Nick Richards, Wenyen Gabriel and P.J. Washington, I have no doubt he will get stronger.

“I think once he gets to Kentucky, of course, the competition may be faster, stronger and some more talented but I don’t see that stopping him. There were people doubting if Dominique Hawkins, Darius Miller and Derek Willis could play for Cal at UK. Probably some will doubt Allen but I think he will do exactly as those guys did and succeed.”

After every Kentucky football game, running back Benny Snell heads to the stands to find his parents, April and Benny Sr. It’s a ritual the player says he would never thing of changing no matter whether UK wins or loses.

“We have been to every game from Pee Wee and middle school on up,” April Snell said. “We used to run the length of the field with him. In college, we can’t do that.

“But when the game ends, we want to get to him and let him know that we love you and are proud of you. It doesn’t matter whether it was a good game or bad game, win or lose. We give him the same love and support to let him know how proud we are. Sometimes he just needs a hug. Sometimes he can’t wait to let us know he did well. But we always want to see us and we want to see him.”

During the game Snell’s parents have different approaches. Benny Snell Sr. likes to walk as the game is going on. April Snell will sit and stand at her seat.

“We kind of leave each other alone,” April Snell said. “We will meet back and hand slap after a good play. They (UK) put the parents as far away (from the field) as they do on purpose so the players can’t look up to see us or so we won’t say anything to players during games. So my husband just walks and paces and I just stand.

“If you see me, I probably look terrified during a game. I am watching it as a parent, not a fan. I want to see him run the ball and get up quickly and not be hurt running off to the sideline. I am concerned for his health. I want him to play the whole season.”

She says her son’s success — he was named a mid-season All-American and is on pace to become UK’s all-time leading rusher — has made him a target for opponents in ways that fans don’t always see.

“This year there has been a lot of dirty plays from a lot of different teams. Twisted ankles, punches under the piles, slamming his head down. That’s my heart is always pounding until I see him get back up,” she said.

Snell ran for 169 yards and one score on 32 carries in last week’s win over Vanderbilt. He rushed 10 times for 74 yards in UK’s game-winning, 80-yard touchdown drive.

“ Been a player that embodies what you want Kentucky to be. She loves Kentucky, loves putting on the jersey. She has worked so hard and developed her game so much the last three years,” Mitchell said. “I always believed Maci was a really good player, so nothing she has done surprised me. I think she will go down as one of the really great players in UK history.”

She’s done plenty already to put herself into that category. She has 1,209 career points — 20th best at UK. Her 177 3-pointers is third most in program history and she led the Southeastern Conference and was second in the nation last season with a 48.4 percent mark from 3-point range. She led last year’s team with 17.3 points per game, was second in steals with 37 and third in assists with 56. She also averaged 3.6 rebounds per game.

“She has always earned her keep and has always worked hard,” Mitchell said. “I really believe she has got another level to take it to this year. She has really improved over the summer. I am excited to go into battle with her

Morris is just as dynamic off the court.

“Maci has charisma. She has that quality that draws people toward her. Great personality, easy to meet, always kind to kids at camp or out on court after a game that want to get her autograph or talk to her,” Mitchell said. “She has a great presence about her and I think people also appreciate how hard she plays and the effort she gives. Plus, everybody loves somebody who shoots at a high level like her.

Western Hills star Wandale Robinson decided not to make another recruiting trip last weekend. He had planned to watch Ohio State play at Purdue but his father, Dale, said trip was cancelled just to give his son a break.

He will make his college choice Nov. 1 at the high school. Along with Ohio State and Purdue, Wandale Robinson has Alabama, Nebraska, Michigan and Kentucky in his final six.

Purdue has shown how it can highlight a freshman receiver this year with Louisville’s Rondale Moore, one of the nation’s top freshmen who had 12 catches for 170 yards in last week’s 49-20 win over then No. 2 Ohio State.

Kentucky’s passing game has been lacking as the Cats had just three completions for 18 yards against Vanderbilt. That could intrigue Robinson because he would have an opportunity to make an impact early. Or it could worry him because the Cats have not had a productive passing offense under coach Mark Stoops.

Robinson has rushed for 1,759 yards and 27 touchdowns this season and caught 19 passes for 390 yards and seven touchdowns. He also got three returns for scores. On defense, he has 96 tackles, including 11 tackles for loss.

Quote of the Week: “They return everybody from a championship team last season. There’s no doubt in my mind they’re the team to beat,” Mississippi State coach Ben Howland on why Tennessee is the top team in the SEC going into the season even though UK is picked to win the league title.

Quote of the Week 2: “I came back for situations like this. I had a lot to prove. Last year during the second half, my play dropped. I told myself coming back this year I wanted to increase my play. I wanted to be more effective in the game, be more of a playmaker and that’s what I’m going to continue to do,” UK linebacker Josh Allen after last week’s win over Vanderbilt.

Quote of the Week 3: “I don’t see how he could not be in the top five. His name has to be on the ballot. When you sign with Alabama no matter what position you play, you merit that type of consideration. I know linemen normally don’t win awards, but he has to be considered,” Glasgow coach Jeff Garmon on offensive lineman Tanner Bowles, an Alabama commit, being a Mr. Football candidate.