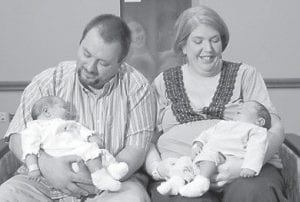 They aren’t America’s heaviest newborn twins on record, but they certainly tip the scales: Sean William Maynard and Abigail Rose Maynard weighed in at a combined 23 pounds and 1 ounce at birth this week, a North Carolina hospital announced.

The boy weighed 10 pounds, 14 ounces; the girl, 12 pounds, 3 ounces. Springs said both babies are in excellent condition after their birth to parents Joey and Erin Maynard of Winston-Salem.

They said the Maynard twins topped a 1997 delivery in North Carolina of big twins weighing a total of 18 pounds, 10 ounces.

Sean, tucked in a blue blanket, was held by his mother and his sister, swaddled in pink, was cradled by her father at a hospital news conference June 20. The infants slept quietly through their first public appearance.