Racers lined up in downtown Whitesburg last month as the 37-mile race Pine Mountain Summit Challenge was ready to start. Next year’s race is already being planned.

Organizers of a bicycle rally in Whitesburg and the surrounding part of the county expect it to double in size next year, attracting up to 100 riders to accept The Pine Mountain Summit Challenge.

Winston Lee, one of the organizers of the event held last month, said the feedback the Letcher County Cyclic Club has received has been extremely positive.

“If we can get our web site up, I really think 100 riders will be pretty easy,” he said.

Lee, a recent appointee to the county tourism and convention commission, said about $2,000 raised by the rally will go to build a county tourism web site, and to buy “wayfinder” signs around Whitesburg. The signs will tell tourists what’s available in the area and point them toward those attractions. Other cities in the area, such as Pikeville, already have such signs in place.

Lee said 50 riders signed up for the challenge this year and paid $25 each to ride the 37-mile route along back roads in Letcher County. 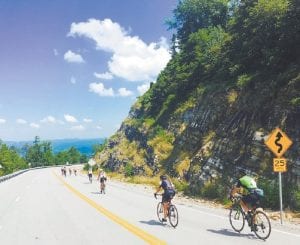 Racers started down Pine Mountain near Whitesburg as they neared the end of the 37-mile race last month.

The route began on Main Street in Whitesburg, and culminated with a ride to the top of Pine Mountain. Whitesburg City Police and the Letcher County Sheriff ’s Department provided escorts for safety, and Beta Sigma Phi sorority and Graham Memorial Presbyterian Church set up aid stations along the route to provide food and water.

“People love to challenge themselves, and you have mountains and elevations here that you just can’t get in Lexington,” Lee said.

Riders came from Lexington, Louisville, at least four surrounding states, and from as far away as a Florida to conquer Kentucky’s second highest mountain. Lee said riders were impressed by the “post cardworthy” views from atop the mountain, and said they will return next year.