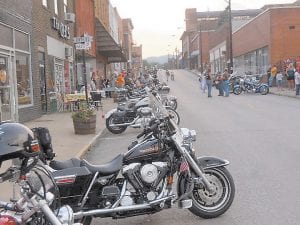 BIKE NIGHT — Motorcycles are pictured lined up along Main Street in Whitesburg on June 12. The City of Whitesburg, Hobo’s Dinner and the Seventh Sons have worked together to make bike nights a reality on Main Street the second Saturday of each month. More than 120 motorcycles were counted at the bike night held July 10. (Photo by Ashley Sexton)

While looking for a way to attract more customers to her restaurant, Kathy Kincer saw two men standing beside their parked motorcycles outside her eatery on Main Street in Whitesburg. Kincer walked outside and asked them if they thought a bike night would bring more business to downtown.

The bikers, brothers Ernest and Norman Bradley, said yes and off ered to help Kincer organize a bike night. Norman Bradley and Chuck Dowdy, a member of the Seventh Sons Motorcycle Club, met with Whitesburg Mayor James W. Craft to see what he thought about the idea of a bike night. Craft was enthusiastic about drawing people to the city and agreed to close Main Street to traffic during the event.

“You’ve heard the saying build it and they will come,” said Ernest Bradley, of Letcher. “That’s basically what we did. This is where business, individuals and government come together to make something happen.”

Kincer counted 65 motorcycles lined up on that downtown street during the first bike night held last April. The number of motorcycles and people has increased with each event. The bike nights are from 6 until 11 p.m. on the second Saturday of each month. 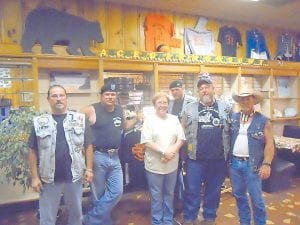 Trophies are awarded to motorcycle owners for “best in show”, “people’s choice”, and “longest ride”. Tables and chairs are placed on the sidewalk so people can eat dinner and socialize outside. Sometimes bands play and other times music can be heard from the speakers of the city’s public address system.

“By having people come (to the bike nights) it puts a smile on people’s faces,” said Eddie Bentley II, a member of the Seventh Sons.

Kincer said families are welcome and games are organized for kids to play, including a “’tater” race game where potatoes are hidden under hay on the lawn of the Methodist church.

“Kids are a big part of it here,” said Kincer. “Everyone is always mindful of that. Honestly, it’s a whole lot of fun.”

“It just gives people something fun to do on a Saturday night,” said Ernest Bradley.

It’s not just for residents of Letcher County. People from surrounding counties, Virginia and Ohio have participated in recent bike nights.

Craft agrees there hasn’t been any trouble at the bike nights.

“It directly and indirectly supports our town,” said Craft. “It creates an atmosphere of friendliness and gives us an opportunity to welcome those who do not live in the city or county. It’s a win/win situation all around.”

Several bike nights were held in 2009 with some having as many as 100 bikes parked on the street. Kincer said she counted 150 bikes last June.

“Bikes were lined up and down both sides of the street,” said Kincer. “It was phenomenal. It was packed.”

The events came to a halt during winter, but bike nights came back in rotation this spring. Kincer said at least 120 motorcycles were parked on Main Street July 10, making it one of the most successful bike nights so far.

“There were a lot of bikes here,” said Kincer. “It was a big crowd. The weather was perfect.”

Craft said the event has grown exponentially since last year.

“It’s an awesome sight to see Main Street lined with motorcycles from the bridge to the bank,” said Craft.

Kincer and the rest of the Bike Night Committee have managed to increase the foot traffic to downtown as well as food orders on those Saturday nights.

“It’s good business for us,” said Kincer. “It’s probably our best day of the month.”

In addition to having the bike night events in downtown Whitesburg, the Seventh Sons decided to have a poker run leading up to the beginning of each bike night.

Riders pay a fee to travel to diff erent locations and collect a playing card. At the end of the ride participants receive a cash prize if they have the best poker hand or the worst poker hand. Proceeds from the poker runs benefit local charities. The Esta Craft Conway Center, Fraternal Order of Police and the Whitesburg Appalachian Regional Hospital (ARH) Foundation have benefited from recent poker runs.

“I had no idea how involved we would get with the community,” said Kincer. “They do a lot of good work as far as charities go.”

Funds raised at a poker run held over the weekend will go toward purchasing dinners and Christmas presents for families in need this holiday season. Last December the Seventh Sons provided food and gifts to 10 families in Letcher County.

To try something new, the Seventh Sons hosted a movie night July 9 at the River Park in Whitesburg and a worship service conducted by the Christian Motorcycle Association on July 11 at the River Park.

“These guys are just phenomenal and I am very proud to call them my friends,” said Kincer. “They would honestly give you the shirt off their back if you needed it worse than them.”

The poker run on August 14 will raise money for autism awareness. Poker runs planned for the fall will help the Eastern Kentucky Veterans Center in Hazard and Pine Mountain Search and Rescue.