Bill Clinton in Kentucky to campaign for his wife 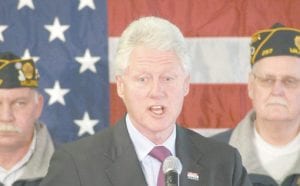 Says wife will help vets Former President Bill Clinton spoke to a standing-room-only crowd of about 250 school kids and veterans at the American Legion Building in Paris on Tuesday. Clinton spoke about issues important to veterans, promising that his wife would “stick with them. She won’t forget about them when she gets elected president.” (Mountain Eagle photo by Chuck Johnson)

Bill Clinton took a shot Tuesday at the Iraq policy of certain Republican nominee John McCain, comparing Iraqi reliance on the U.S. military to someone who never leaves a neighbor’s couch after losing his home to fire.

Clinton spoke to more than 3,000 people at a civic center to start a full day of campaigning in Kentucky for his wife leading up to the state’s May 20 primary. Kentucky usually is an afterthought in the nominating process due to the late primary, but this year Hillary Rodham Clinton and Barack Obama remain locked in a tight battle for the Democratic presidential nomination.

In an hourlong speech, the former president said his wife, a senator from New York, is the candidate best equipped to lead the country at home and abroad.

Bill Clinton, who carried Kentucky twice in winning the White House in 1992 and 1996, did not mention Obama by name, but took a potshot his wife’s rival.

“One of the most amusing things to me in this election is how all these people who are prominent in the campaign of Hillary’s opponent keep saying, ‘Well, you know the 1990s, they weren’t that hot either. They weren’t that much better than this decade.'”

As the crowd hooted, Clinton then said, “Which part of the ’90s did you not like – peace or prosperity?” – repeating a line used by his wife to counter criticism of Clinton’s presidency.

On Iraq, the former president said his wife “strongly believes the time has come to bring our soldiers home.” If elected, she would instruct the nation’s top military leaders to present a plan to start accomplishing that goal, he said.

Hillary Clinton’s strategy would include leaving a small contingent of special forces in northern Iraq to counter any efforts by al-Qaida to remobilize, he said.

The comment was a jab at McCain, the Arizona senator who declared this week that “we are succeeding” in Iraq and said he wouldn’t change course – even as the U.S. death toll rose to 4,000 and the war entered its sixth year.

In the past, McCain has suggested a lengthy U.S. presence in Iraq, but said a remark that American troops could stay in Iraq for 100 years has been distorted.

To the Kentucky crowd, Clinton likened the situation in Iraq to someone who takes in a neighbor supposedly for a short time after his house burns down.

Clinton’s speech focused on a wide range of issues, and he said his wife was best prepared to lead the country away from economic turmoil and toward energy independence.

On the economy, he predicted his wife would outperform his stewardship.

“I think you’ll have more jobs and more prosperity when she served than you did when I was president,” he said. “I think she will do better.”

On achieving energy independence, Clinton lumped coal with solar, wind, biomass and other alternative sources. Kentucky is one of the nation’s leading coal producers, and Clinton said a key is achieving clean-coal technology.

Clinton said the country needs to “solve the riddle of coal,” finding ways to bury carbon dioxide or convert it into something else.

Clinton played to a friendly crowd, though not everyone had made up their minds.

Ceci Mitchell, who wore a straw hat featuring a sign proclaiming herself a “Yellow Dog Democrat,” said she was undecided between Clinton and Obama.

She said Bill Clinton was her favorite president and could help sway her, but said she didn’t want to see negative attacks from either campaign.

“We’ll see how everybody behaves,” she said. “Provided no one offends me, they have equal chances.”

Clinton met earlier Tuesday with Gov. Steve Beshear, a Democratic superdelegate who has not endorsed a presidential candidate. Superdelegates are party leaders whose votes at the nominating convention are not bound by the results of any primary or caucus.

Beshear said the former president asked him to support Hillary Clinton, but he remained undecided after the meeting. He did describe himself as an “admirer” of the New York senator.

From Frankfort, Clinton was headed north and east in Kentucky, with stops planned in Paris, Maysville and Morehead.