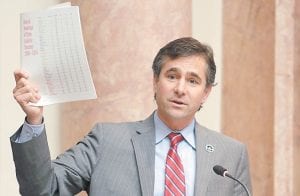 “We’re getting ready to create a new government agency and more red tape,” said Rep. Chad McCoy, a Bardstown attorney and one of three Republicans who spoke against the measure. “I’m a Republican. I don’t like that.” (LRC Public Information photo)

A Senate bill that would establish review panels for lawsuits against health-care providers passed narrowly out of the state House with changes that are meant to make it more constitutional. The Senate concurred with the House’s changes to the bill late last week and the bill now heads to the governor’s desk for his signature.

The review panel would be made up of three physicians that would determine if lawsuits against healthcare providers have merit before being filed in court. All parties would have to agree to bypass the review panel in order to take the case directly to court.

Rep. Robert Benvenuti, R-Lexington, presented the bill on the House floor and said review panels create a “fair, balanced process.” He said Kentucky needs liability reform because providers are “fleeing the state” and paying much higher premiums than their counterparts in other states that have some type of reform, which he said ultimately leads to access issues for everyone.

“We’ve created a litigation industry in this commonwealth,” he said.

Rep. Chad McCoy, one of three Republicans who spoke against the measure, said that such panels have proven ineffective in other states. He noted that 27 states have adopted review panels since the 1970s, but 10 of those states have since gotten rid of them because “they don’t work.”

McCoy, a lawyer from Bardstown, told House members that review panels are unconstitutional and that they “walk all over” a person’s right to a trial by jury. He pointed out that they also create more claims because plaintiffs’ attorneys often view them as an inexpensive way to “run it up the flagpole” to see if a case is worth pursuing.

“We’re getting ready to create a new government agency and more red tape,” he said. “I’m a Republican. I don’t like that.”

McCoy suggested that instead of review panels, the state needs to pursue a more successful system called “affidavit of merit,” which would require claims to be reviewed for their merit before they are even allowed to go to court. Alvarado, after the bill’s committee meeting Feb. 28, said he would support the idea, but that to be successful it would also require a constitutional change to allow economic caps on settlements. Only voters can change the state constitution.

Representatives Jason Petrie of Elkton and Kenny Imes of Murray were the other two Republicans who spoke against the bill.

Rep. James Kay, D-Versailles, spoke against it, saying it would create barriers to the courts: “This bill closes our courts, placing a barrier of doctors between the citizens of Kentucky and the judge and the jury — closing the courthouse doors.”

Rep. Jason Nemes, RLouisville, who helped draft the House changes in the bill, said he could never have voted for the bill without the changes, which he said made it more constitutional.

Nemes explained that the House changes did three things: It sets a firm ninemonth time frame for the opinion to be issued, instead of the loose, extendable six months allowed by the original bill; it calls for a list of volunteer lawyers and physicians to fill the panel seats, instead of these positions being appointed; and “most importantly,” it would allows the trial judge to determine if the panel’s opinion is admissible in court, instead of being automatically admitted.

Similar legislation has been introduced for years and was passed out of the Republican led Senate, but never heard in the Democrat led House. Alvarado, a physician, has been the bill’s sponsor for three years.

Rep. Tom Burch, D-Louisville, former chairman of the House Health and Welfare Committee, said he had successfully killed this bill in the past because it is not constitutional. He said, “It does not help the patients. It only helps the providers.”

While Alvarado has long called this bill his “white whale” — and it looks like he’s finally about to harpoon it — he said in an interview that it’s final passage wouldn’t mean he is finished with his quest for tort reform in Kentucky. He said: “There’s more coming. You know me.”

Alvarado is also sponsoring another bill, Senate Bill 18, that would prevent medical peer reviews from being used as evidence in malpractice cases. It passed out of the House Judiciary Committee March 1.