Bill would bring help to victims of timber theft 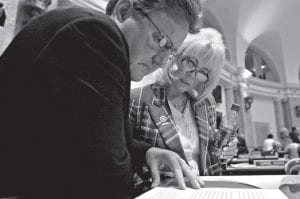 A bill designed to better protect property owners from timber theft has been introduced in the Kentucky House of Representatives.

House Bill 489, introduced last week by State Rep. Leslie A. Combs (D-94), would amend Kentucky’s theft law “to specifically include timber and trees as property which may be the subject of theft.”

Timber theft is currently viewed by many prosecutors and law-enforcement officials as a property dispute that should be dealt with in civil court. As timber values have risen, pressure has been stepped up on lawmakers nationwide to make the act of timber theft a felony punishable by a sentence in prison.

The question of how timber theft is currently being dealt with in Kentucky received worldwide publicity recently when an elderly Letcher County couple went public with their fight to get criminal charges filed against men they say stole $50,000 worth of timber from their property at Craft’s Colly.

The bill, which was referred the House Natural Resources and Environment Committee, on Feb. 11 would also:

• require written contracts between logger and property owners before timber could be sold. The contract would be on file in the office of the county court clerk.

• require notice to neighbors of timber cutting no more than 60 days nor less than 30 days before an operation begins.

• require the marking of cut timber with a number identifying the logger before logs can be removed from property.

• create a new section of KRS Chapter 532 to provide specific measures of restitution in timber theft cases including reimbursement of costs of investigation and prosecution.