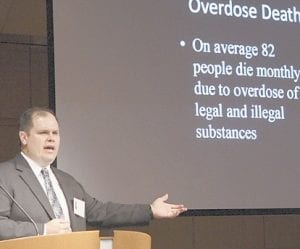 House Speaker Greg Stumbo has filed a comprehensive bill aimed at attacking the state’s prescription drug problem on all sides, namely taking the data already collected from the 11 million prescriptions dispensed in the state and putting them directly in the hands of the attorney general to zero in on pill pushers and dealers.

The 50-page bill, filed by the Prestonsburg Democrat after a statewide summit last week shed light on the extent of prescription pill abuse, would also require prescribers, including nurse practitioners, to use the state’s prescription drug monitoring system known as KASPER and pay an annual fee of $100 to do so.

“ This epidemic truly knows no bounds, and it’s poised to get much worse if we do nothing,” Stumbo said in a press release. “My approach will help us end the deadly flow of these drugs both now and however the battlefield may change in the future.” Attorney General Jack Conway agreed something must be done. “I’m sick and tired of people coming up to me saying we’ve lost a generation to prescription pills,” he said. 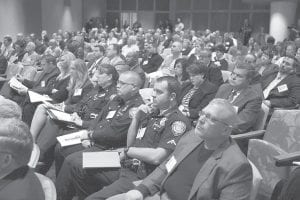 The bill also aims at improving communication with law enforcement and medical licensing boards; if a complaint about suspect dispensing is received by the Office of the Attorney General or by a medical licensure board, for example, it must be relayed to the Kentucky State Police.

KSP Commissioner Rodney Brewer approves of Stumbo’s proposal, particularly because the changes would mean KASPER could be used “as an investigative tool,” he said. “It is a real step in the right direction regarding shutting down these fronts that are nothing more than pill mills.”

The licensing boards, which would have pain and addiction specialists appointed to them, will be under the strict watch of Conway’s office and will be compelled to cooperate “at all times” with its requests. Stumbo has been critical of the state Board of Medical Licensure, which is authorized to analyze KASPER data to find problem prescribers, for failing to police its own profession.

As of now, just 32 percent of prescribers and just 26 percent of pharmacists have KASPER accounts, Dave Hopkins, KASPER program manager in the Office of Inspector General, said in January at a statewide conference fo- cused on prescription drug abuse. When prescribers have accounts, they are able to pull up reports online on what prescriptions a patient has taken in the past, numbers that can indicate whether patients are “doctor shopping” or abusing drugs.

The bill would require prescribers to use KASPER upon accepting a new patient and every three months with ongoing patients to see if there are suspicious patterns in their prescription history. Before writing a prescription, doctors and other providers must do a complete physical exam of the patient, write up a treatment plan and discuss the risks of the use of controlled substances.

The bill would also allow commonwealth’s attorneys and county attorneys to gain access to KASPER. Medicaid would monitor prescribers in their program as well.

Though numbers were slightly lower in rural areas, more than 90 percent of pharmacists and more than 95 percent of prescribers that use KASPER feel it is effective, a study conducted by the Institute of Pharmaceutical Outcomes and Policy indicates. As for mandating its use, doctors seem open. “I would not have a problem with it if there was an easy way to do it, a little bit faster than what we have now,” said Dr. Roger Humphries, chairman of the Department of Emergency Medicine at the University of Kentucky’s College of Medicine.

The bill would also prohibit pharmacies from accepting prescriptions for Schedule II or III controlled substances, like oxycodone and hydrocodone, for more than a 90-day supply. They also would no longer be able to ship more than 30-day supply of the drugs in one shipment. “Part of the problem is there is so much medication out there on the street,” said Stumbo’s spokesman Brian Wilkerson. “This prevents that.”

Stumbo’s bill additionally aims at getting a detailed look at how many deaths are occurring due to drugs or drug overdoses in Kentucky. To get accurate numbers, as per the bill’s proposal, coroners would be required to report any death caused from the use of drugs or drug overdoes to the Division of Kentucky State Medical Examiners Office. That office will compile an annual report which includes all of the drugs which cause or contributed to the deaths, where they occurred and how the drugs were obtained.