Bill would move Whitesburg from fifth- to fourth-class city 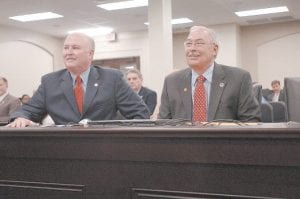 TESTIFYING IN FRANKFORT – State Sen. Johnny Ray Turner (D-Dwarf), left, whose district includes Letcher County, and Whitesburg Mayor James W. Craft testified before a Senate committee in Frankfort last week concerning a bill that would change Whitesburg’s classification from a fifth-class city to a fourth-class city. The bill, introduced by Turner, was later approved by the Senate by a vote of 36-0. The measure is expected to approved by the House.

A bill to reclassify the City of Whitesburg from a fifth-class to a fourth-class city was approved unanimously last week by the Kentucky State Senate and is now moving through the House of Representatives.

Senate Bill 179 was introduced by State Senator Johnny Ray Turner on Feb. 21 and approved by a 36-0 vote in the Senate on March 26. The bill has since been approved by the House Local Government Committee and is awaiting final passage.

The measure began moving quickly through the Senate after Turner and Whitesburg Mayor James Wiley Craft testified before the Senate’s State and Local Government Committee early last week. The hearing was attended by all members of the Whitesburg City Council.

Craft said he and the council members agreed to seek the change in class designation after they learned that Whitesburg’s population has grown to 3,100 residents instead of 1,517 previously cited. Classification of a fourth-class city requires a population of between 3,000 and 7,000 residents.

Craft said the change should greatly benefit the city, not only in how it is perceived elsewhere but also in terms of its eligibility for state and federal spending. Craft said the change would increase the city’s viability for large funding projects with both the state and federal government as well as the city’s prestige with lawmakers because of the increased population figures.

The city council in February authorized Craft to seek the change to a fourth-class city after learning that the city had been shortchanged in the 2000 census count because neither the residents of the Whitesburg Housing Project nor residents of the Letcher Manor Nursing Home were counted in the census.

Craft said he asked for the authorization after a survey showed there are 1,241 households with E-911 addresses inside the city limits. By using the Census Bureau’s estimate of 2.1 members per household, the actual number of city residents rises to 3,100.

The Senate’s State and Local Government Committee approved the change after questioning Craft and Turner, and after reviewing census and 911 estimates along with affidavits from the directors of both the housing authority and the nursing home.