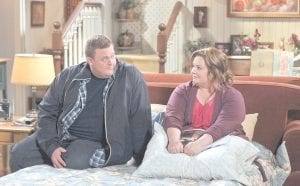 Billy Gardell, left, and Melissa McCarthy are shown in a scene from the sitcom “Mike & Molly,” which airs Mondays at 9:30 p.m. on CBS. (AP Photo/CBS)

It’s a birthday for Mike Biggs, the goodhearted, heavyset hero of “Mike & Molly,” and Molly Flynn, his plus-size love, presents him with the cake.

“Make a wish,” she says, to which he replies, “I don’t need to. I already got everything I want.”

A little bit sappy? Not this show, insists Billy Gardell, who co-stars with Melissa McCarthy in the hit CBS comedy.

“Mike & Molly,” he says, exists “in a world where we don’t just say a snarky line, make a crazy face, and walk out of the room. There’s actually some tender moments here, too.”

Most viewers also occupy this world, and an average weekly audience of 11 million fans clearly identify with “ Mike & Molly,” making it a Top 20 fixture in its sophomore season (it airs Monday at 9:30 p.m.).

The title characters are a working class Chicago couple who met at an Overeaters Anonymous meeting. Stories deal with tight budgets and workaday jobs (he’s a cop, she’s a fourth-grade schoolteacher), their exasperating families, and the ups and downs of their romance and impending marriage.

As Mike struggles to shed a few pounds (a relatable issue to viewers, fat or thin), the show doesn’t shy from wisecracks about the lovers’ generous waistlines.

“Everybody always asks me, ‘Does it bother you about the fat jokes?’” says Gardell during a recent interview. “At the beginning, we had to address that issue, because we’re a show in a world of shows where everybody’s perfect — and we’re not! But as the show went on, it has become more about the love story.”

When the writing takes a sensitive turn, the co-stars make the most of it. McCarthy, previously known from “The Gilmore Girls” and Oscar-nominated for last year’s hit, “ Bridesmaids,” has already logged an Emmy for her performance as the gentle but no-nonsense Molly.

At age 42, Gardell, whose TV credits include “Yes, Dear” and “My Name is Earl,” is a veteran standup comic with an easygoing earnestness, both on- and offcamera. There’s nothing glib or snarky about him.

In fact, when the subject turns to “Mike & Molly,” the operative term to describe Gardell is grateful.

He is grateful to be teamed with McCarthy, and with their fellow cast members (Reno Wilson, Katy Mixon, Swoosie Kurtz, Nyambi Nyambi), with Chuck Lorre, its executive producer, and with James Burrows, its legendary dicasion rector, on the dream project “Mike & Molly” has turned out to be.

“It was the last audition of pilot season for me,” says Gardell, thinking back just two short years ago as he braced to leave Los Angeles for a possible radio gig in the Midwest.

He was aiming to cut down on his 42-weeks-a-year touring schedule as a comic. It had begun to wear him down as he approached age 40, with a wife and a young son he seldom saw.

For that reason, among many others, his starring role on “Mike & Molly” was a blessing.

“For every guy like me, there’s 20 guys who put the time in and have the talent that didn’t get the break,” he says, his gratitude palpable. “As a comic, I’ve heard gunshots while I’m trying to get to sleep. I’ve performed where people wanted to do you harm after the show because of something you said. Now I always tell my castmates when something seems to go wrong, ‘I’ve been in real trouble, and THIS ain’t it!’”

A take-it-as-it-comes guy, he is unperturbed when the interview — in the lobby of a posh Manhattan hotel — is interrupted by ear-shattering construction noise somewhere in the building. There is nothing to do but seek relief out on the sidewalk, which Gardell does cheerfully. Standing curbside with his interviewer on West 56th Street and nursing a Starbucks Red Eye, he revels in the pleasant afternoon and the occasional greeting from a “Mike & Molly” fan.

“I love your show,” says one passer-by, and Gardell grins. A truck driver inching down the street toots his horn and waves.

“I knew I could do the funny parts,” says Gardell when asked if he worried that his acting range could satisfy the show’s demands. “The serious parts I owe to Jimmy Burrows, who’s really brought my acting along. And I owe a lot to Melissa McCarthy: When I have those moments with her, I know I can be vulnerable, and that she’s going to reflect it back.”

Born in Pittsburgh but raised in Central Florida as an overweight misfit in a broken home, Gardell was dealt his share of vulnerabilities. And he found an effective outlet.

“The quickest way to defuse fear or insecurity or anger is usually humor,” he says. “I think comics figure that out quickly, and, once you figure it out, you think, ‘Hey, if I can do this and get paid, that would be kind of cool.’”

His first standup gig was at an Orlando comedy club in 1987.

“I did really well for five minutes,” he recalls, “then terrible for two years straight.”

But he stuck with it. He was on the road at age 19, headlining by 23. He moved to Los Angeles three years later, in 1997 — then struggled another decade before real stardom hit.

“The whole first year of ‘Mike & Molly’ went by in a blur,” he says. “But threequarters through the first season I felt like I could relax a bit. I saw it in the response of the studio audience, which started to go from people who arrived saying, ‘ What the hell’s “Mike & Molly?’” to ‘I WANT to see “Mike & Molly”!’ That’s how I knew we were turning the corner.”

Then, as if on cue, another fan rounds the street corner and spies Gardell.

“Best show on TV!” he declares.

“Hey, thank you, brother,” Gardell calls back gratefully. “’Preciate that!”