Bindi Irwin is not afraid to go where the wild things go. The 8-year-old daughter of “Crocodile Hunter” Steve Irwin stars in a new series called “Bindi: The Jungle Girl,” on Animal Planet and Discovery Kids channel.

Cameras follow Bindi on a wildlife adventure. The journey starts in Bindi’s two-story tree house as she introduces her favorite critters. “Animals visit me in my tree house all the time,” she says. “But some actually stay with me, like Corney, the corn snake, he sleeps with me, and Blackie the black-headed python, he stays there as well.”

The petite conservationist rides elephants, plays with snakes and shares interesting facts about wombats, African rhinoceroses and other animals just as her father did on his Animal Planet shows.

Parts of the new series were filmed before Steve Irwin’s death last year. Scenes show him chasing, feeding and bonding with animals. “Steve Irwin is in about 80 percent of the show,” says its executive producer, John Stainton. “Although he only shot seven episodes, he will appear in the series’ 26 episodes.” 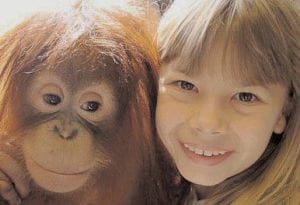 A LOOK AT ENDANGERED ANIMALS

The show’s first episode, “Not Many Left,” focuses on red pandas, orangutans of Southeast Asia, great white sharks and manatees. These are some of the world’s most endangered animals.

Bindi’s mom, Terri Irwin, also joins in the wildlife adventure. She appears in a segment of the show called “Crikey,” in which she shares fun facts and trivia about animals. For example, she lets viewers in on how to tell a frog from a toad. “Frogs have teeth, but toads don’t,” Terri Irwin says. “Kids really like to have knowledge that their parents don’t know. It’s impressive.”

IN HER FATHER’S FOOTSTEPS

Bindi says she hopes to follow in her father’s footsteps and continue his mission to help protect the world’s wildlife. “I want to get the message out about conservation,” she says. “We need to learn more about animals. Their outside cover might be different, but we’re pretty much all the same.” Her goal, she says, is to “make sure that wildlife stays around forever or as long as possible.”

Bindi’s Blog gives kids a chance to see her in action and to find out more about the wild animals of the world. Do you have a question for Bindi? If so, go to