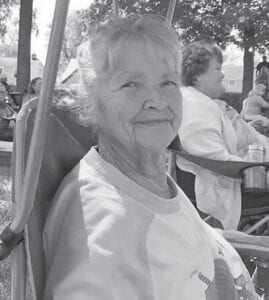 Daphne Korner was sneaky with her phone Saturday at Metamora Music Festival.

As I sit down to finish this column this morning I find it is difficult to concentrate as once again I pulled up the blinds. The dawn of day is breaking, and oh the luscious look of the hayfield and the trees on the hillside are so beautiful, I want to stop typing and go outside to enjoy the birds as they come in for breakfast. I just opened the door for a few minutes as the trees are blowing. It is a beautiful morning with a slight touch coolness at the present time which would send me back in for a cover.

Birds are like children to an extent. My son Keith Ballard buys something called wild birdseed. The only thing, birds are picky, what they don’t like they will spit out over the side of the bird-feeder.

We have had the pleasure of a few hummingbirds. Now these little dickens can be very dominant. One hummingbird will sit to watch as another comes into the feeder for a sip of the sugar-water that Keith keeps refilled. This particular hummingbird will bombard another to make it leave.

One morning as Keith sat on the deck enjoying his coffee and cigarette, the hummingbird came within a short space from him in midair and just stayed there, as if to say what are you doing here?

How is everything in your little corner of this gigantic world we live in? Now I don’t have to wonder as we are having an early fall. It seems that we have gone from 90’s to almost 0 in my brain in this part of the Ohio Valley.

As bad as I hate to, I have to dig out sweatshirts, a light jacket, and jeans, and make sure I have a coat. Gloves, scarves and long johns are clean and ready to grab, oh now quit your laughing.

Seriously when we were first married, my husband Jack had a new pair of quilted long thermals with socks to match that he had purchased to wear as he worked outside in the winter. Well he lost them. The house we lived in was so drafty, we had a wood and coal stove in the living room as the source of heat. I was so cold that I slipped in the bathroom and put his thermals on and slept in them.

The funny thing I was so petite I was lost in them. I did manage the night but didn’t try anymore. In fact, after that I don’t think I ever owned pajamas until last year when I bought three pair at Walmart in Whitesburg. I wish I had purchased a few more sets as the local Walmart in this area didn’t carry them.

Metamora, Indiana had its annual music festival this past weekend. This marks the 22nd year.

Somehow I have never paid attention, until last year, when I enjoyed it so much that once again I ventured back.

Last year it was sort of a cool damp day. Of course it was nice when I left Harrison, but by the time I walked to the Back Porch stage I knew I was in for trouble, as the temperature dropped drastically. Needless to say I was uncomfortable all afternoon. I might have been uncomfortable, but not enough to make me leave.

Saturday as I was leaving the house it was a beautiful day. I went prepared with an extra sweatshirt, and two covers in the car. The only thing, when I arrived the sun was shining and so nice, I left the sweatshirt and covers in the car as it is a long walk to the festival stage.

Well you can figure out what I am about to write. It got chilly before the day would come to an end. I didn’t want to walk the distance back to the car nor bother someone to take me in a cart.

Saturday and Sunday featured several bands, some that I had never heard of. Before the show started a couple of people sat down in front of where Daphne Korner and I were sitting waiting for the bands to begin. Then a tall guy joined them carrying a stool. I somehow suspected he was in a band. I made a silly remark, never bothering to ask if he was in a band.

I took a walk then started talking to a woman who was going to the same place as me. Conversing with the woman, who was the man in question’s mother, I found she lives in Harrison. Such a coincidence.

Tay Bronson is a very talented singer, songwriter and musician. I really enjoyed his show. Tay attended Harrison High School. Tay has a CD called Drinks & Memories which is great. I really enjoy his style of singing and his writing abilities. Tay was also with a band called Push Down & Shove an alternative rock band that eventually parted as bands do. You can check out Tay Bronson on Internet. I had the pleasure of meeting Tay Bronson’s beautiful girl friend Angie also.

Sunday one band in particular that performed was Jericho Road, featuring Dale Farmer who produced and directed the Mountain Minor movie, Warren and Judy Waldron, and Amy Coogan Clay. If this band had performed all day as a solo band I would have sat there listening and dancing in my chair.

It was wonderful to see Jericho old time band along with other bands perform on stage again since this is the first festival in this area since COVID-19 or whatever this pandemic is called has gripped the nation and taken over our lives.

Jim and Connie Wendel own the property where the festival is held each year. They erected a special stage which is built behind a barn. Usually they have a huge tent. This year was different as it was all open, which was right up my alley, as I have my canopy chair that sort of protects me from the sun if it gets too hot, which isn’t often. I had the utmost pleasure to meet Connie personally as she saw me walking to the stage and gave me a ride on her golf cart to the stage. Daphne and I spent Saturday and Sunday after- noon at the festival. I have neglected everyone over the weekend as I have been selfish once again doing what I love most.

I think I might have heard Keith say halleluiah, or could be, thank God and Greyhound she’s gone. Actually Keith did tell me that he was glad that I felt good enough to go to the festival.

It was very difficult watching several enjoy eating ice cream cones or smelling the delicious aroma of the porch or steaks on the grill, that is until I observed some woman stroking her dog while eating, then licking her fingers. I thought I was going to be sick in public. After that sight I couldn’t even think of trying to eat the peanut butter and crackers I had brought.

Now there were a few bits of scenery that were entertaining besides the music. I observed a rainbow of colors in hair, women with pink, orange, blue, green and deep purple. Then the finale was a man with an orange ponytail. Thank You God for the gift of old age.

Yes, Sue my faithful reader from the mountains, I was on the road again.

Johnny and Ann Calihan are still doing well, at least I hope they are. The same with my children.

Hello Les and Pat Wagner. I promise I will try to be in touch in a few days.

Buddy and Bernice Caudill, I will try to see you before winter.

If anyone hears of a molasses stir-off please let me know. I would love to get a quart of molasses, or whatever it is called sorghum.

Hello to Mike and Marcia Caudill, you know what I am thinking, the mountains are calling and I must go.