Birth control options are many 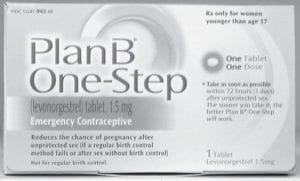 A package containing the controversial “morning after” pill is shown. Experts say confusion and uncertainty despite the availability of many birth-control options is a big reason that half of U.S. pregnancies are unintended. (AP photo)

Worried about birth control in light of headlines about side effects from Yaz and the patch? Women have a lot of options that are safe and effective, including some that are even more reliable.

Yet almost half of U.S. pregnancies are unintended — and experts say confusion and uncertainty despite all the options is a big reason.

“We have a whole generation now of young adults, the vast majority of whom are sexually active, who are in a fog about modern contraception,” says Sarah Brown of the National Campaign to Prevent Teen and Unplanned Pregnancy. “They don’t know enough to make a reasonable choice.”

To help, her center just opened a novel website — www.bedsider.org — to offer frank answers for all those questions you might be embarrassed to ask.

Wonder how easy it is to use the NuvaRing, or what the once-every-threemonths contraceptive shot costs? Can’t imagine how to insert the female condom? Want to know if the rhythm method has any chance of working? Or whether your partner could feel your IUD? What are the side effects, and which methods work best?

Those aren’t just questions for teens and young adults. Consider that half of girls are sexually active by age 17, and that menopause hits around 50. To avoid an unplanned pregnancy, the average American woman will have to use contraception for several decades. The right choice when you’re 20 might not still be when you’re 35 or 40.

And starting in 2013, affording different types may become easier as the new health care law requires insurance to cover contraception with no copays.

Today, sterilization, vasectomy for men and tubetying for women, surprisingly is the nation’s leading form of birth control.

When it comes to reversible contraception, the pill is No. 1, highly effective if you take it correctly although missing doses raises the risk of pregnancy. The pill can bring other benefits as well. Long-term use lowers the risk of ovarian cancer; some types cut menstrual cramps or help clear acne.

But last week focused a lot of attention on birth control. First came the Obama administration’s decision to keep the Plan B morning-after pill — which can prevent pregnancy if taken soon enough after unprotected sex — behind pharmacy counters so only those 17 and older can get it without a prescription.

Then came two days of hearings about a rare but serious side effect of the pill and another hormone-containing contraceptive, the Ortho Evra patch. Advisers to the Food and Drug Administration recommended stronger warning labels on Yaz and similar new-generation birth control pills because they’re more likely than older, cheaper pills to cause dangerous blood clots. The FDA estimates that 10 in 10,000 women a year will get a clot on the newer drugs compared with 6 in 10,000 who take the older pills.

FDA’s advisers said the weekly patch may bring a somewhat higher clot risk, too, but called the patch an important option for women who have trouble sticking with a daily pill.

Brown points out that the contraceptives are less risky than getting pregnant: About 20 in 10,000 women who are pregnant or have just given birth experience a blood clot.

When it comes to reliability, the most effective contraceptives may be two so-called long-acting products many women haven’t heard of:

— The IUD, a little Tshaped device that sits in the uterus to block sperm.

— An implant called Implanon, a matchsticksized hormone-emitting rod implanted in the arm.

You can forget about pregnancy for three years with Implanon and either five or 10 years with the IUD, depending on the brand.

Change your mind about either type, and your doctor simply removes it sooner.

“I texted my boyfriend and said I am baby- free until 2016,” Margaret Nupp, 27, says of her quick visit to the gynecologist to get the five-year IUD called Mirena.

Tired of trying to remember to take the pill, Nupp was drawn to an IUD because of “the infallibility of it.”

“I’ve got a bright future ahead of me,” said the Saratoga Springs, N.Y., woman. “I don’t want to get pregnant right now. Five years, sure. Right now, no thank you.”

Some women experience pain with insertion, but not Nupp. She also liked that Mirena, which sends a hormone into the uterus, can end periods. In contrast, periods can become heavier with a different IUD, the Paragard, that lasts longer but works with copper rather than hormones.

But only a fraction of U.S. women use these longacting contraceptives, 5.6 percent, according to the latest government data. In parts of Europe, they’re much more popular.

Why not here? Partly, it’s the up-front cost, which can reach $500 or $600 unless your insurance covers it. Partly, it’s a long-outdated belief that IUDs aren’t for young women. Or there may be a holdover effect from fears about the 1970s Dalkon shield, which was blamed for dangerous infections — although today’s brands are very safe.