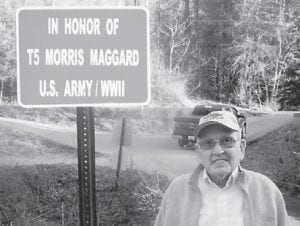 — Morris Maggard of Cowan, ‘the A-Model man”, celebrated his 90th birthday on March 19. He and his wife, Della, have three daughters, Stella Bates, Mary Wilson and Gwen Saylor, all of Whitesburg. They also have seven grandchildren and 13 great-grandchildren. He is a U.S. Army veteran of World War II, and a county bridge at Cowan was recently named in his honor.