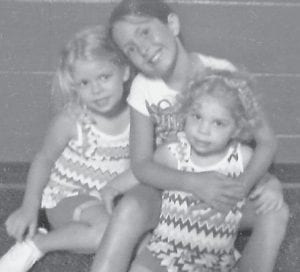 Toni Leigh Nicole Adams turned 10 years old on Oct. 30. Pictured with her are her two younger sisters, Tori McKenzie, 4, and Taylor Grace Howard, 3. They are the daughters of Nikki and Scott Howard of Whitesburg, and Jonathan Begley of Goldsboro, N.C. Their grandparents are Mark and Nancy Adams of Isom, Scott and Susie Howard of Roxana, Margaret Stidham of Linefork, Leonard and Gwen Begley of Campbranch, and Barbara Bennett of Goldsboro, N.C. Great-grandparents are Charlene Adams of Isom and the late Larry Adams, the late Corene Miles of Mayking, and Imogene Howard of Johnson City, Tenn. Great-great-grandparents are Viola “Buggie” Adams of Isom and the late Earl Adams, and the late Barbara and Peanut Napier, formerly of Marlowe.