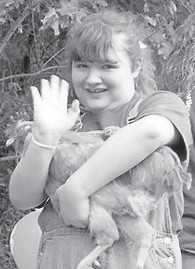 — Martha West turned 14 on April 26. She is the daughter of Ben and Sonja West, and has a brother and a sister, Stephen and Annie. Her grandparents are Joy Watts and the late Green Watts, the late Anna Lorene Collier West, the late George Gordon West, the late Mary Newsome Collier and the late Benjamin Arnold Collier.