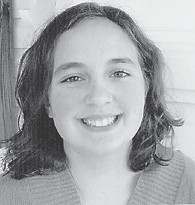 — Ashley Elizabeth Caudill celebrated her 13th birthday at the home of her grandparents, Mike and Nanetta Dingus of Neon, on April 20. She is the daughter of Barbie Dingus of Greer, S.C., and has a two-year-old sister, Emerson Blair Dingus. Helping her celebrate her birthday in addition to her grandparents were her uncle and aunt Michael and Shane Dingus, and cousins Josh and Falon Bentley, Jackson Day, and Joe King.