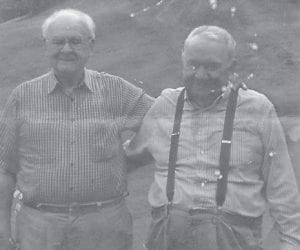 BIRTHDAY – Vernon Cornett was surprised with a 90th birthday party given at the home of Gary and Sheila Cornett. The party was hosted by his three sons and their wives, Gary and Sheila Cornett, Larry and Judy Cornett, and Richard and Linda Cornett. His brother, Gay Cornett, came from Danville to attend the celebration. Grandchildren, nieces and nephews, and friends and neighbors were also present. Pictured are Vernon Cornett (left) and his brother, Gay (right).