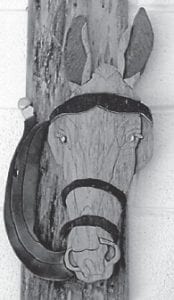 Virginia Brown received a special gift from Darrell Boggs for her 92nd birthday, a mule carved from a log from his grandfather George Sturgill’s barn, which was built in the last century. Before it was used in the barn, the log had been in the home of Stephen Adams, Mrs. Brown’s grandfather, built in the 19th century. Years ago the Stephen Adams home was pictured in The Mountain Eagle along with the rip saw that was used to build it. This house was replaced by Hop Gibson with the one Mrs. Brown still lives in.