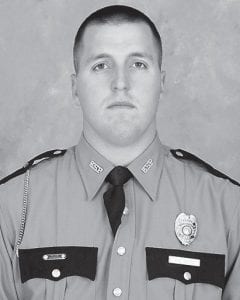 Kentucky State Police Trooper First Class Jonathan Biven has been named commander of Trooper Island Camp. The camp was developed by the KSP as part of a long- range program of public service to the youth of Kentucky. Biven was among several troopers who interviewed for the position.

“ I am very excited to carry on the tradition of Trooper Island,” said Biven. “I have a sincere passion for this program and plan to build upon the great strides my predecessors have set before me.

“Because of the pride I have in this agency and those that work for it, being a part of Trooper Island Camp is something I don’t take lightly,” Biven said. “We must continue to shape the youth of tomorrow by giving those who are underprivileged the same opportunities to succeed.”

Biven is an 11-year veteran of KSP and his assignments have included the Campbellsburg Post and the Bowling Green Post, where he served as trooper, detective and most recently, as public affairs officer. He resides in Cave City with his wife and two daughters.