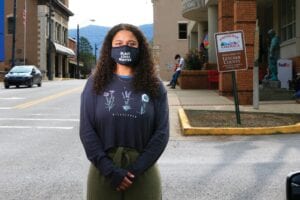 Dayja Hogg, 19, stands for a portrait near the Letcher County Courthouse. Following the deaths of George Floyd in Minneapolis and Breonna Taylor in Louisville, Hogg helped organize a protest in her hometown of Whitesburg where she grew up experiencing racism. (AP Photo/Brian Blanco)

Dayjha Hogg has known racism her entire life, but until recently she thought she and her family had to face it on their own.

Hogg, 19, lives in Whitesburg, a town of 2,000 people in the heart of Appalachia. She is biracial — born to a Black father and a white mother — and can recall times when she and her brothers were targets of racial slurs, suspicious glances and rude comments.

But in the wake of this year’s nationwide protests against institutional racism — sparked by George Floyd’s killing in Minnesota — Black Appalachians have found an opportunity for their history and struggles to be recognized more widely. Though the national reckoning on racism has raised awareness about the issue for many white Americans, that it is also echoing in the hills of Appalachia is particularly striking in a region that isn’t known for its diversity.

Hogg saw how the message of the protests — which were also fueled by the police killing of Breonna Taylor in Kentucky — was resonating when she organized a rally in her home county of Letcher, where 2% of the population of about 20,000 is Black. She thought only a few people would show up, but roughly 200 did, most of them white. 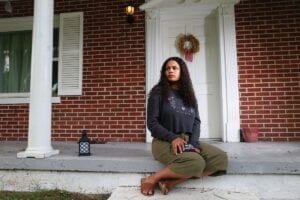 Dayja Hogg sits in front of her home in Whitesburg. (AP Photo)

“This is my home,” Hogg said. “All my friends and all these young people, they’re ready to fight.”

The experience helped transform Hogg’s own idea of her community in eastern Kentucky.

Though the majority of Black Kentuckians live in the metropolitan areas of Louisville and Lexington, many have resided in the mountains in the east for generations. However, pervasive stereotypes of Appalachia — that its residents are predominantly white, poor and, at best, ignorant about race relations, at worst, racist — ignore the presence of Black people in the region and the history of multiracial coalitions that marched for racial justice and worker’s rights there, notes University of Tennessee at Knoxville sociologist Enkeshi El-Amin.

“Invisibility is a major part of the experience of Black folks in Appalachia,” said El-Amin, who also co-hosts the Black in Appalachia podcast. “You don’t think of a movement like Black Lives Matter of being something that is vibrant in a region like this, right? Because you don’t think of Black people when you think of this region.”

But many are working to increase the visibility of Black people in the region — and the demographics are changing as well: Racial minorities made up nearly half of Appalachia’s population growth in the past two decades.

This year, a Black lawmaker from Louisville nearly pulled off an upset in the Democratic primary for U.S. Senate with a campaign built around the slogan, “From the hood to the holler.” State Rep. Charles Booker bet his campaign on the idea that concern about injustices done to Black Americans by police mattered to people everywhere, and he nearly defeated a heavily bankrolled opponent.

Mekyah Davis, a 24-year-old who grew up not far from the Kentucky border in Big Stone Gap, Virginia, has also been trying to change perceptions about Appalachia and the Black community’s place in it. At the STAY Project, a multiracial youth coalition, he organizes programs for young Black Appalachians that educate them about their history and encourage more community involvement.

Davis long felt his blackness made him an outsider in Appalachia, and that he had no choice but to leave. If economic prospects were already bleak, racism seemed to exacerbate those challenges.

But working with STAY has given him hope about his future in his hometown.

“It made me realize that I don’t have to make this exodus from the region to be successful, to thrive,” he said. “I never would have thought about identifying as Appalachian before that.”

This summer’s protests have him feeling optimistic about the work he has been doing, trying to alleviate the impact of racism on Black people and confronting the prejudices he sees in everyday interactions.

The protests also made him feel more connected to the larger Black experience in the U.S., despite the different challenges faced by urban and rural communities.

In Kentucky, Booker is trying to show people of different racial backgrounds that they’re connected, too. His Senate campaign particularly focused on economic inequality, in a state rife with poverty.

Out of the 80 Appalachian counties designated as “distressed” by the Appalachian Regional Commission in 2019, nearly half are located in Kentucky.

Since his loss, he’s founded an organization called “Hood to the Holler” to continue discussing this issue as well as democratic participation and climate change.

While some Appalachians — like Americans elsewhere — have rejected the ongoing protests as a threat to their way of life and interest has waned for others, Hogg is still hopeful for the future. And though she’s disappointed that no officers were charged in the killing of Breonna Taylor, she doesn’t see it as a reason to give up. Some close friends and family haven’t been as supportive as predicted, but she’s inspired by the encouragement she’s received, especially from Whitesburg artists who have used their work to spread awareness.

“Don’t get me wrong, there are people that need to change,” Hogg said. “I’m hopeful that we’ll change a few more hearts.”

Hudspeth Blackburn is a corps member for the Associated Press/ Report for America Statehouse News Initiative. Report for America is a nonprofit national service program that places journalists in local newsrooms to report on undercovered issues.