Black bear killed after breaking into home at Linefork 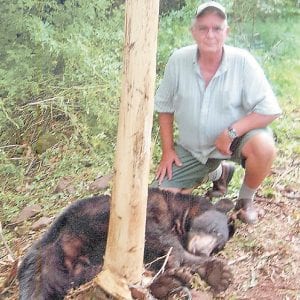 Herb Crase, of Elizabeth City, N.C., formerly of Letcher County, kneels behind a dead male black bear. Officials with the Kentucky Department of Fish and Wildlife trapped and killed the bear May 29 after the animal broke into Crase’s late grandparents’ house at Linefork.

A male black bear was killed by state wildlife officials Saturday after the bear broke into a home at Linefork.

“It becomes a public safety issue at that point and that is way over the line,” said Steven Dobey, black bear biologist with the Kentucky Division of Fish and Wildlife. “We consider this an unusual circumstance that it broke into a home and that is why we went to extreme measures.”

“If it’s going to display that kind of behavior at that early of an age it is probably going to get worse,” said Dobey. “We think it calls for an extreme response.”

Mark Marraccini, spokesperson with the Kentucky Division of Fish and Wildlife, said about four bears a year are destroyed because of irregular behavior.

Marraccini said a home entry is a serious situation that needs to be handled immediately. He said no one was in the house when the bear, but people could have been there if the bear decided to come back.

The house belongs to the children of the late Henry and Dicey Halcomb. Herb Crase, who is a grandson of the Halcombs, said the black bear broke into the home on May 26, causing an extensive amount of damage.

“He tore curtains down,” said Crase. “He tore a hole in the roof, broke windows and tore furniture. He broke a rocking chair and ‘crapped’ on the floors. You could see the paw prints on the window.”

Crase said the bear, which he estimated to weigh 100 pounds and be about one-and-a-half-years old, came back to the house on May 27 and May 28.

Crase lives in Elizabeth City, N.C., but stayed at the house during the weekend. He said the situation could have been much worse if someone had been in the house when the bear came entered the house.

“It’s unusual and very dangerous,” said Crase. “Someone could have gotten hurt.”

Crase said a relative notified state wildlife officials, who set a trap on May 28. The bear was trapped and killed on May 29.

“When a bear breaks into a house like that, they have to kill him,” said Crase.

Dobey said bears are most active at this time of the year, which is the beginning of breeding season.

“Males are moving around extensively,” said Dobey. “The more they move the more people will see them.”

Dobey said people should remember to keep “bear attractors” such as garbage, pet food, birdfeeders and beehives, away from their homes.

Call 1-800-858-1549 to report a nuisance bear or 1-800-25ALERT if it is an emergency. Marraccini said people should call wildlife officials immediately if a bear has entered a residence.