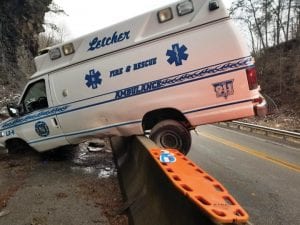 BLACK ICE on Tuesday morning led to a Letcher Fire and Rescue ambulance crashing into a concrete barrier at Isom, and causing two other vehicles to collide while trying to avoid the accident. Kentucky State Police said the ambulance was traveling South on KY 15 when it hit an icy patch and the driver lost control. The driver of a vehicle travelling behind it attempted to stop, and the car behind it slid into it in the rear. No one was seriously injured in the collision, but two EMTs and a patient on the ambulance were taken to the emergency room for evaluation. Temperatures Tuesday morning hovered around 31 degrees, and a light wintery mix made roads treacherous. Schools were on a two-hour delay because of the weather.