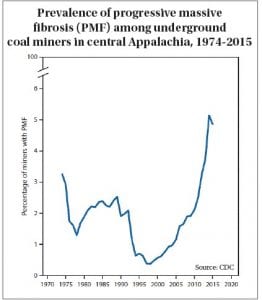 Anyone who mines coal for a living — and, for that matter, anyone who cares about coal miners — will find this graphic deeply troubling. It tells an alarming story that we shouldn’t be hearing today, about something that shouldn’t be happening.

The graphic appears in a December 16 bulletin from the federal Centers for Disease Control and Prevention (CDC), titled “Resurgence of Progressive Massive Fibrosis in Coal Miners — Eastern Kentucky, 2016.”

CDC notes that the prevalence of coal workers’ pneumoconiosis — Black Lung Disease — had been falling over the years, largely because of improved implementation of mine ventilation regulations. And, says CDC, by the 1990s the most lethal form of this incurable disease — progressive massive fibrosis (PMF), which gradually and brutally suffocates its victims — was “nearly eradicated.” Since then, however, “increases in the prevalence and severity of coal workers’ pneumoconiosis have occurred, especially in central Appalachia.”

As the graphic shows, more than 5 percent of the underground miners with roughly 25 years of experience who were tested for Black Lung in 2015 had the worst form of the disease.

Most dramatically, an experienced Pike County radiologist contacted CDC’s National Institute for Occupational Safety and Health (NIOSH) in June 2016 after seeing a sharp spike in PMF among his coal miner patients from Letcher, Floyd, Knott, and Pike counties. NIOSH sent investigators to review the doctor’s x-ray findings. They confirmed what he was seeing: an upsurge in the deadliest form of Black Lung — an upsurge for which there is, as yet, no clear explanation.

Several factors appear to be at work:

• Mining thinner coal seams than in the past, miners are cutting through more rock — and breathing deadly silica dust.

• Many miners today are working longer hours than in the more unionized past, increasing their exposure at younger ages.

• Although mining is supposed to pause to allow roof bolters to work in clean air, many roof bolters have had to work for extended periods in dust-laden return air — even though that’s illegal.

And one reason for the upsurge appears to be related — ironically — to the steadily declining numbers of coal-mining jobs in Appalachia.

Historically, many miners have been reluctant to get tested for Black Lung, fearing they’ll be fired if they test positive and their employer finds out — and becomes responsible for paying Black Lung compensation benefits when the miner can no longer work.

In theory, those fears are groundless — because, under the law, x-ray findings are not shared with employers. But many miners don’t believe it. That’s one reason why voluntary participation in the federally-funded Coal Workers’ Health Surveillance Program has been low among Kentucky miners. In recent years only 17 percent have opted to be tested for Black Lung.

Now, though, some working miners may figure they’ve nothing to lose by getting tested, since their jobs are on the economic chopping block anyway.

Federal Black Lung benefits, which top out at about $15,000 a year for a miner with three or more dependents, are less than a third of an average miner’s earnings in eastern Kentucky — but they do come with valuable health insurance. The pros and cons of filing for federal and state benefits are too complex to summarize here. But the bottom line is that Black Lung benefits are considerably better than nothing, which is what many miners get, after a lifetime of hard work, in pensions from coal companies that go bankrupt.

What needs to be done about today’s Black Lung crisis? We can think of five urgent priorities:

First, more miners need to get themselves tested.

Second, CDC and NIOSH need funding to conduct a full-scale investigation of the upsurge in the incidence of the worst form of Black Lung.

Third, the federal Mine Safety and Health Administration (MSHA) needs funding to step up enforcement of dust-control regulations, including making sure that all underground miners wear continuous personal dust monitors that transmit data in real time.

Fourth, members of Congress who are eager to roll back ‘Obamacare’ need to stop and think, because the much-maligned Affordable Care Act includes a little-noticed provision that makes it less difficult than in the past for miners with a respiratory disability to claim Black Lung benefits.

And fifth, the national media need to pay attention to this developing story.

If there’s good news on that front, it’s that one of the nation’s best investigative reporters — Howard Berkes of National Public Radio — is on top of the story and highlighted it in an alarming broadcast last week. Aided by Benny Becker, a young reporter working here with Appalshop and WMMT, he told the wrenching story of Mackie Branham, a 39-year-old Pike County miner living on borrowed time. Below we provide links to Berkes’s must-listen NPR report (and a PBS interview with Berkes), to Becker’s report on WMMT, and to Becker’s audiotape of Mackie Branham and his wife Amber.

Warning: Becker’s seven-minute audiotape may leave you in tears. As it should. Because in all the hubbub about big changes in Washington, D.C., we need to remember, as Christmas approaches, all the good people in the rest of America who deserve some attention and are waiting quietly for a bit of help.