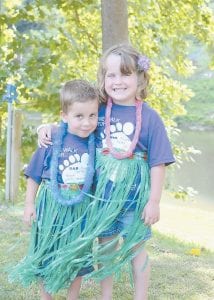 Kylee and Kayden Bates participate in the Relay for Life. They are the children of Jeremy and Candace Bates of Isom. (Photo by Mitch Caudill)

A new report by the U.S. Centers for Disease Control and Prevention finds black lung disease isn’t limited to miners who work underground. About 2 percent of surface miners tested in 2010-2011 also had the disease.

That’s 46 of 2,257 miners, the report said. Twelve had the most severe form, and most of them never worked underground.

“The numbers are higher than what you’d expect. We would expect it to be essentially zero,” CDC researcher Cara Halldin told The Courier-Journal of Louisville. “This is a workforce that has previously been thought to not have the disease or not have much disease.”

Black lung, or coal workers’ pneumoconiosis, is an irreversible and potentially debilitating disease caused by exposure to coal dust.

The report found it was more prevalent in surface miners in Kentucky, Virginia and West Virginia than in other coal mining states, with 31 of the 46 cases occurring in Central Appalachia. But it did not say why. 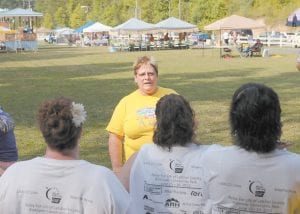 Letcher County Relay for Life Chairperson Alberta Perry led a meeting of team leaders before the event. Perry is retiring from her position after again helping to raise more than $100,000. (Photo by Mitch Caudill)

Researchers did, however, note that miners in Central Appalachia typically worked in the coalfields about eight years longer than their counterparts in other states.

Halldin said Kentucky’s rate was the highest at 5.7 percent, or 13 cases.

Federal law sets a limit for respirable dust in both underground and surface coal mines but requires monitoring for the prevalence of black lung only at underground operations. The researchers suggest the limit may need to be lowered because it “might be insufficient to protect against disease.”

“ There’s drilling, blasting, dumping of rock, dumping of coal,” he said. “People have had the idea that you’re working outdoors in open air, you’re not exposed to dust. But you are.”

About half the mines in eastern Kentucky are surface operations.