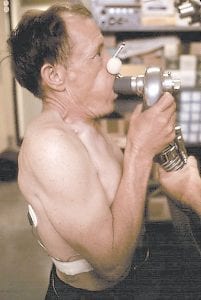 This June 1974 photo shows a miner at the Black Lung Laboratory at ARH hospital in Beckley, W.Va, having his lung capacity tested to determine whether he has the disease.

I have mixed emotions about the Center for Public Integrity winning its first Pulitzer Prize for the investigative report by Chris Hamby on black lung.

The series focused on the southern West Virginia coalfields and miners who are suffering and dying from black lung, while the top lawyers, doctors, coal operators and hospitals are paying big bucks to each other to defeat these sick and voiceless miners and their families.

Workers such as black lung attorney John Cline of Piney View, West Virginia, Dr. Donald Rasmussen of Beckley and many others have worked tirelessly to help these miners suffering from black lung in the face of this powerful and corrupt opposition.

Surely, our political leaders, most of who have been in office for decades, will not view this Pulitzer Prize lightly. An award of this magnitude should be a wakeup call for our leaders. The outside world is now aware of the plight of the coalminer and his family. His work, his life, his death and the dreaded illness that cripples and kills him — black lung — are not to be taken lightly. Miners and those who depend on them deserve to be treated as human beings instead of high-stake pawns used by doctors, lawyers and hospitals as a money-making scheme, in which coal operators are willing to pay top dollar to see the disabled miner defeated.

Communities in the coal-producing areas of Central Appalachia are at the top of every negative survey list you come across. Public opinion polls are having a field day painting negative portrayals, and they have the statistics to back up their claims. This is hurtful and disturbing. But it doesn’t take a degree in clinical psychology to understand why coalfield residents have reason to be miserable or depressed when those in control of your work, livelihood and health are working against you.

Part of the award-winning series analyzed the actions of Johns Hopkins radiologist Paul Wheeler, whose diagnoses routinely ruled out black lung even when other doctors found evidence of the disease.

Our political leaders have let the coalminer down. This report, “Breathless and Burdened: Dying from Black Lung, Buried by Law and Medicine,” proves the blacklung benefits program has been rigged against the miner for years.

U.S. Senator Jay Rockefeller was one of the first West Virginia political leaders to respond to the Center for Public Integrity’s report. He requested a formal investigation into the black lung benefits system. However, Rockefeller’s wife serves on the board of Johns Hopkins Medicine, which was part of the Center for Public Integrity’s investigation. Dr. Wheeler, the Johns Hopkins radiologist, read thousands of lung X- rays and never diagnosed a single case of complicated black lung. The investigation found that when other doctors diagnosed black lung, Wheeler was likely to say that miners’ lung conditions were the result of tuberculosis or other diseases. Subsequent biopsies or autopsies showed that Wheeler was wrong in more than 100 cases.

I realize Johns Hopkins Medicine is large and has many divisions. A board member could easily be unaware of the operations of a single part of the institution. But if Gary Fox (the deceased West Virginia coalminer whose story was part of the Pulitzer-winning report) had told Senator Rockefeller what was going on with his black lung benefit claim, would he have gotten the same response that Senator Rockefeller gave after the publication of the Center for Public Integrity report?

Or would any of the other coalfi eld politicians (such as U.S. Rep. Shelly Moore Capito, U.S. Rep. Nick Rahall, or U.S. Sen. Joe Manchin) have responded in a similar fashion? They all say they are behind the coalminer. What have they done for the coalminer? Have they even responded to the letter from Mary Fox, Gary’s widow? Why does it take reporters, lights, cameras and millions of viewers to get a politician’s attention? They are elected to look out for the best interests of their constituents, whether or not there’s a Pulitzerwinning journalist watching them. This system is broken.