Black Sabbath emerges from the dark with new hit album 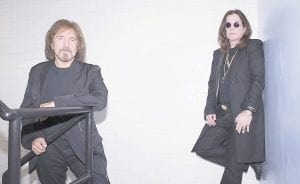 Ozzy Osbourne and the members of Black Sabbath worked hard to create a dark aura around their band in the late 1960s, laying down a proto-metal blueprint for a legion of groups to follow.

As the band’s original lineup attempted to reform over the last 10 years to record a long-anticipated new album — the first with Osbourne singing since he was fired in 1979 — there was no need to manufacture that sense of doom. Time and again events conspired to interfere. On its latest attempt, things went more awry than usual. Drummer Bill Ward left the band over a contract dispute. Guitarist Tony Iommi was diagnosed with lymphoma. And Osbourne began to drink again.

“Things always get messed up,” Osbourne said. “Like Bill had the heart attack on one (in the late 1990s). When Tony got stricken by cancer, we went ‘This is … insane.’ But he turned up every day. We all thought that if we don’t get our march on with this thing we’re going to be … dead, by the next time we could all be … dead. So we had to really march on with our project. We couldn’t wait.”

Sabbath has released the Rick Rubin-produced “13” after more than two years of writing and recording and it’s debuted at No. 1 on the Billboard 200. It’s meant to be a return to the band’s most powerful period — its defining first three albums “Black Sabbath,” ‘’Paranoid” and “Master of Reality” released in 1970-71 — and mostly succeeds with the help of Rage Against the Machine drummer Brad Wilk.

It was Rubin’s idea to return to Sabbath’s roots, and bassist and principal lyricist Geezer Butler said the producer served as a fifth member of the band, keeping it focused — something the band had been unable to do in a previous attempt. It took longer to record than any other album with the original lineup, but the time was necessary.

“It’s like the old saying, you do what you know best,” the 63-yearold Butler said. “You sort of forget all the keyboard bits and all the multi-instruments and just get back to the basics like on the first three or four albums, and just keep that live feel. We had the sort of philosophy that if it wasn’t done in four takes, then forget it.”

Sabbath’s early period remains among the most influential series of recordings in rock ‘n’ roll history. Blending a darker shade of the blues with horror movie and postapocalyptic imagery, Sabbath was unlike any other band. It belongs in a very small group of 1960s bands that serve as the wellspring for all that was to come in rock along with The Beatles, The Rolling Stones, Jimi Hendrix and The Doors.

The group’s sound was heavier than anything rock has yet produced, reliant on the complex, muscular and surprisingly funky interplay of Ward and Butler with Osbourne and Iommi layering weird vibes over the top. They did not write songs about girls or cars. They wore dark clothes and made music that mirrored society’s blacker aspects. They wrote anti-war songs disguised as dystopian nightmares, and songs about space travel, mental illness, creepy children and marijuana.

And they wrapped it in a bottom heavy musical concoction that was relentlessly grinding yet as insidiously hummable as a sunny pop song.

“When they started there was no such thing as heavy metal and it feels like the whole genre of heavy metal really is based on Black Sabbath,” Rubin said. “It may not have always sounded the same and it’s gone through a lot of changes and there’s a lot of really interesting metal that doesn’t sound like Black Sabbath. But it feels like they were probably the first with the idea that this dark, heavy music could be the whole trip.”

Their popularity would eventually do them in. The quality of their music declined due mostly to drug abuse, and the band fired Osbourne after eight albums and 11 years together. Osbourne went on to a popular solo career and reality TV fame. And the remaining members of the band continued to play together in some combination over the years with other lead singers, most notably the late Ronnie James Dio. And they’ve occasionally reformed to tour. But the long-talked-about reunion album had always eluded them, and it seemed this time would be no different.

Ward started writing with the band but soon left, a development Osbourne found sad. Then Iommi’s diagnosis came in December 2011.

“ You know the thing (that) is the easiest part of getting the reformation of Black Sabbath is just saying, ‘Yeah, we’ll do it,’” the 64-year-old Osbourne said. “The hard part is getting us in one place all on the same day playing our stuff. If Tony Iommi can be treated for … cancer and turn up to rehearsal and come up with great riffs, it’s not fair that any one of us don’t come up to the bench, you know?”

Iommi, who’s now in remission, traveled back and forth from Los Angeles to London for treatment. Both Osbourne and Butler expressed admiration for the guitarist.

“Tony, he’s my hero because I don’t know how he did it,” Osbourne said.

Osbourne also had his struggles during the recording. He was fired from the band for substance abuse problems and has worked on changing his lifestyle after meeting and marrying his wife and manager Sharon Osbourne. She expressed anger earlier this year when Osbourne began drinking while making the album. He says it’s been four months since he’s had a drink and things are well with his family.

“It’s just one of them things — I’m an alcoholic,” Osbourne said. “And the most unnatural thing for an alcoholic is not to drink. So every now and again I’ll just go and have a few drinks. But it catches up with you and bites you in the butt, you know? I mean Sharon has been living with me for 33 years, and it just (messed) the family up again. My son has got 10 years of sobriety. So I’m trying one day at a time, you know?”

Rubin said he saw none of these outside struggles in the studio, beyond the strengthened resolve to finish. When the band finally plugged in, Rubin was delighted to find they still had that Sabbath groove. But Osbourne wasn’t immediately taken with Rubin’s plan to revisit the band’s distant past.

“I kept saying to him, really and truly the first Black Sabbath album was a live album without the audience,” Osbourne said. “And he kept going on about these bluesy undertones, and I’m like what the … is he on about? Because when you’re in a band you do things that you like. The first person I want to impress with my work is me. If I don’t like it, I don’t like it, you know? It took me a long time to get my head around where Rick was going. But he proved me wrong, I tell you, in the end.”