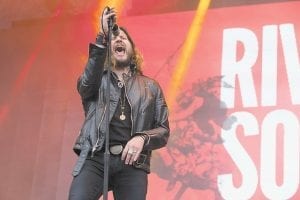 TO PERFORM MAY 23 — Rival Sons lead singer Jay Buchanan is photographed performing with his band at the Tons Of Rock Festival in Norway last June. Rival Sons will perform in concert next Tuesday (May 23) at The Forum at Hal Rogers Center in Hazard. Tickets, $30, are available by calling 1-606-434-8648. (Rex Features via AP Images)

When it comes to describing the music of Rival Sons, the Detroit Free Press put it as well as anybody earlier this month.

The Los Angeles-based band, touring in support of its fifth studio album, Hollow Bones, returns to eastern Kentucky next Tuesday (May 23) for its first appearance here since August 29, 2013, before a packed crowd at Summit City. Because of high ticket demand brought on by the release of two more highly-acclaimed albums and a successful tour with Black Sabbath, next week’s show is being held at The Forum at Hal Rogers Center in Hazard. Special guests are the London Souls, a New York City band whose music Entertainment Weekly has described as “mashing together Byrds-y folk-rock with Badfinger’s more bubblegum soul moments, with a little bit of The Beatles’ Revolver sprinkled on top.” DJ Howie Pyro and poet Derrick Brown also perform.

Rival Sons founding member Scott Holiday, the band’s lead guitarist, told Gainesville Scene music writer Judson L. Moore earlier this month that the band “decided to do something different than we’ve ever done” before on its current tour. “Different than I’ve ever seen to be honest,” he said, “especially with a rock ‘n roll band, but what we put together with me and our friend, Howie Pyro, who has a radio show at home called Intoxica Radio. And when he does it live, it’s Intoxica Radio Live.

“He only brings very, very rare 45’s and he spins garage and soul, funk and every—his rule is everything has to make people want to dance, when he does it live, that’s what it is. Howie is of the indie generation and he was in dancing and he’s a legend unto himself. That’s Howie Pyro. He’s great.

“After this, we bring out our friend Derrick Brown. He’s a published poet at home. He is the owner and president of Write Bloody Publishing, which is a publishing company for poets.”

In describing the band’s musical style to Gainesville Scene’s Moore, Holiday said “[We are] very eclectic personalities that like all sorts of music. Mostly, you will probably hear us not listening to rock ‘n roll. We’ve been listening to the newest Anderson Paak record, which is fantastic.

“We listen to a lot of hiphop. We listen to a lot of old soul, a lot of funk. … I still love rock ‘n roll, but our music is an amalgamation of our joys and consciously knowing that we are a rock ‘n roll band. … Rock ‘n roll has seemed to — I think now it’s just re-sprouting. But when we started the band even before I met the guys when I was looking for everybody, I felt rock ‘n roll had become very complacent with itself and it felt horrible and, of course, it was never going to die or go away, but I just felt like The Blues Brothers being on a mission from God.

“We have a responsibility to do it the way that we believe and want to see it done, a dirty rock ‘n roll band. We’ve always said a quote, ‘It seemed like rock forgot to roll. It’s like rock forgot to dance.’ It forgot its boogie. It forgot what it was all about and I just wanted to make something that I will be proud of and feel like it’s encompassing these elements. It’s dirty. It’s very bluesy. It’s country and western, a lot of R&B, funk and a lot of soul. That’s what rock ‘n roll is. I think the great amalgamation of all these styles.

Holiday also described to the Gainesville Scene what life was like while touring with Black Sabbath on its “The End” tour, which concluded in Birmingham, England on February 4. “We toured with Black Sabbath for 13 months and we often shared the same hotels as them. I remember I could hear like two doors down from me, it sounded like somebody was listening to the Osbourne TV show too loud on the TV,” Holiday told Moore. “Sharon and Ozzy were in there and the kids had dropped by too. He was going, ‘Sharon, turn down the T.V.’ And she’s going, ‘Ozzy, no!’ You can just hear them doing it … they’re right there! I just looked outside the door and thought, ‘Oh, my God! This is unbelievable. I can’t believe we’re doing this.’”

The Hal Rogers Center is located just off KY 15 on the Whitesburg side of Hazard, near Hazard High School. Doors for next Tuesday’s show will open at 7 p.m. with performances set to begin at 7:30. Persons wishing more information may call promoter Greg Napier at 606-434-8648.