‘Blackberry winter’ moves on, taking any chance of frost with it 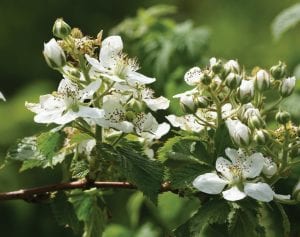 “Blackberry winter” was expected to end in eastern Kentucky around the middle of this week as high temperatures were forecast to move back into the Eighties. Tuesday night’s expected low of 45 degrees is common during the period known as blackberry winter, which is one of the names given to a cold spell that often accompanies the spring blooming of wild blackberries, which can be found in most areas of Letcher County.

In the spirit of the late Yogi Berra who, legend has it, coined such bits of wisdom as, “It ain’t over till it’s over,” and “ It ain’t over till the fat lady sings,” I will admit that there’s still a chance that we’ll get another frost before next October. On the other hand, I’d be willing to bet that it’s more likely to happen in September than at any time during the remainder of this spring.

Even though, at this writing, we still have the last three days of blackberry winter to go, I am firmly convinced that it will be over by the time this column hits your newspaper. To the best of my knowledge, there are no fat ladies on Charlie Brown Road. In fact, there are no ladies here, of any size or shape, who are apt to burst out singing.

All of which leads me to a profound sense of optimism that we may see apples, pears and even peaches on the fruit trees in our backyard for the first time since 2012. We have not seen a ripe fruit on the half dozen trees scattered about in the last six years.

During three of those years, we had hard freezes in May that left many gallons of thumb-sized or even larger baby fruits lying all over the backyard. The other three dormant years saw killing April frosts turn many thousands of pink and/or white fruit blossoms into messes that looked like the trees had been doused with road tar.

In fact, a couple of late April frosts this year have caused enough damage on Charlie Brown Road that the potential fruit crop will not be anything to write home about. I have simply strolled around the premises enough to notice that, when I look hard enough, I can find a few baby fruits that have a shot at reaching maturity. There may be any number of pitfalls, such as blight, insects, high winds, dry weather, etc., that could yet do them in, but I seriously doubt that another late freeze is in the forecast for my fruit trees.

In the meantime, speaking of first things in a long time, I’m having trouble recalling the last time I didn’t have to replant that first row of frostbitten beans. I have a row of little Ettes, about 40 feet long, that are nearly ready to hoe for the first time and will be, when Andy gets here, before the week is out. Over the last several years I’ve come to assume that frost will kill my first bean planting, no matter how long I wait to get seeds into the ground.

We may have to replant these before it’s all said and done, but I don’t think it will have anything to do with frost. We have already had to replant peas because rabbits ate them off about as fast as they sprouted.

Rabbits love the taste of recently-sprouted garden beans better than anything I’ve ever grown in a garden.

Ordinarily I can get them to grow for a week or 10 days and the rabbits lose interest. However, getting them through that first little growth spurt is usually solved with a light dusting of powdered insecticide, the cheaper the better. Rabbits won’t touch the stuff unless it washes off and it has rained every single day since the beans came up. Hopefully we will come up with some sort of solution that doesn’t involve firearms by the time you read this. I have located half a dozen shotgun shells, just in case.

Now you’d think that rabbits would love lettuce, or, at least, I’da thought so. But we have a 30-foot row of the prettiest black seeded Simpson I’ve seen in a decade and there’s no sign that the rabbits have even touched it.

The lettuce resulted from a whim. Andy suggested some lettuce might taste good to go with a pound of onion sets he had just planted. I found some seeds labeled March, 2014. I sowed it much thicker than it should have been sowed, in a row at least five times longer than we needed. Now it looks as if every seed came up twice. Maybe rabbits don’t like lettuce from old seeds.

If you happen to be on Charlie Brown Road, stop