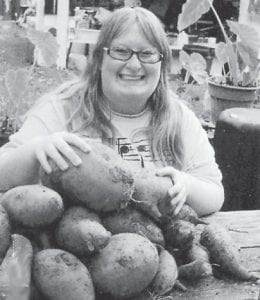 GARDENER — Grayson Holbrook of Whitesburg, planted three sweet potato plants. When they were dug, she had a bushel of sweet potatoes, some weighing three to five pounds.

How is everything in your little corner of the world? If I had all day to write, I might start complaining and tell you all about aches and pains and heartaches by the number, but I am just going to say, “Oh Lord I’m tired!”

Now for those of you who attended the Blackey Day event, you might say, no wonder!

Friday morning, my friend Alphine Stacy and I left Cincinnati at 9 a.m. We finally reached my sisterin law Wanda Hall’s at 5 that evening. This was the first time Alphine had ever been to the eastern part of Kentucky.

As I was on my journey and the trees begin to change colors, I wanted to just drink in the beauty as if it was liquid, as I could feel it seeping into the very pits of my entire being.

I couldn’t hold a conversation without stopping right in the middle to say, “Look at that!”

We stopped several places along the way. I decided to go see my sister Loretta Church at Letcher Manor then stop at my brother Jerry and Mattie Hall’s for a bit, then on to Wanda’s.

You would think after traveling all day I would settle down for a quiet relaxing evening and watch television. I did sit down a few minutes, long enough to change shoes as Wanda, Sue, Alphine and I went to Campbell’s Branch to listen to music and dance.

I am glad I did as Bits & Pieces was there. Alphine and I sure couldn’t sit still very long as the music was good.

Afterward we went back to Wanda’s for some quiet time. Wanda had worked all day, and Alphine and I finally were tired enough to rest.

Saturday morning finally arrived. I was like a little kid on Christmas morning waiting to get up to see what Santa had brought me as I was wanting to head to Blackey Day.

Wanda and Sue decided to wait until it was a little later to let it warm up since Wanda had been sick.

I wanted to be there at 10 to see my special cousin Jack Adams and Lee Sexton, who opened the event. I took two lawn chairs and two covers, plus we took a light jacket and a heavy coat with us.

I gave someone my schedule so I can’t mention all the bands, 7 South with Libby Day Smith and Jon Caudill, along with Route 7 Will Caudill and the other local bands sure make one proud to say, “I am from eastern Kentucky.”

What I like most is the down to earth, ‘not getting above your raising’ attitude.

Jon Caudill has been a mentor of Jack Adams for a long time, plus he went to school with Jack’s dad Jeff Adams. Jon taught school for several years along with several of their band members.

While at Blackey Day I talked to several people, a couple I met last year for the first time since I was a child and used to go to my grandmother’s Betty Barton, who lived at Woodrock.

I hadn’t seen Winfred until last year since I was about 11 or 12 years old. He barely remembers me, but we do remember some of the same people.

A beautiful woman came to speak to me, saying she reads my column and finally connected who I was. Her sister Joann was married to my mother’s brother, my uncle Dave Adams, for many years.

Della, it was so good talking to you. Please call me sometime.

I traveled all those miles from Harrison to Blackey to talk to a woman who lives about three miles from me, Berma Matthews’s cousin Hester Konkle lives in Bright, Ind. I also met Earnestine McIntyre from Greensburg, Ind., who is a sister-in-law to Hester.

Richard Cornett, who lives in the Dayton area, was at Blackey Days. Richard is a brother to Jim Cornett, who writes.

Richard is getting tired of seeing me as we seem to be at lots of the same places.

Doris Adams decided to dance with Alphine and me. Doris made a comment that I looked a lot smaller this time, which made my day.

I have lost a few pounds and I am not going to look for them. If someone finds them like they did my black jacket last year, they can keep them too!

I had received a call from St. Cloud, Fla., asking about Blackey Day. I fibbed as I said I didn’t think that was a one-lane bridge going into Blackey. Imagine my surprise when I started to cross it!

It was a pleasure meeting the three guys from Florida, Harold, Roy and Roger. Remember we have a date, same place, same time next year!

Wanda started getting a little tired so she and Sue went home to rest then met Alphine and me later as we decided to go to a square dance at Carcassonne!

Wanda decided to drive and am I glad she did as this is a beautiful but a very winding road. I would have gotten lost. We didn’t stay for the whole time.

I had never been to Carcassonne though I have read about it for years in The Mountain Eagle. I really didn’t want to leave. Thanks to some stranger for dancing with me as it has been a long time since I square danced.

The music was great with Lee Sexton, Jack Adams, Shawn Stamper, and someone playing the fiddle and dobra.

I have enough of my mother Ora Hall in me that if someone beat on bucket lid I guess I would dance.

I hope my next visit to Campbell’s Branch that Jon Caudill, Libby Day Smith, and 7 South band will be playing there.

Alphine and I stopped for a bite to eat and I got to see Annabelle Wright, who is as beautiful as ever.

Sunday after spending time with Wanda and Sue, Alphine and I went back to the Letcher Manor to visit Loretta, then I decided to take Alphine to see the view from Pine Mountain.

I guess I have been away from the mountains too long as I chickened out and didn’t go on Little Shepherd Trail.

I miss my brother Richie Hall so much as he would take me there along with every back road he could think of.

Oh how I miss going there and riding in the back of his pickup truck. I love the open riding of a truck bed. There’s something about the wind caressing your face and of course blowing your hair every which way. I must say I have eaten a little dust when we were on Black Mountain a few years ago.

My car is really low so I didn’t dare try to go across Big Branch to get to the graveyard. I am thinking about selling my van and buying a small truck because there’s no way I will ever drive this van across the narrow roads either.

I am one lucky misplaced hillbilly to have family that loves me very much. My niece Sue and I went for a walk at 10 p.m. There were a couple of pawpaws in a tree, and we could see them by a light on a pole. Sue somehow got them down for me.

A couple of days later Wanda found several and froze them for me, so I had pawpaws waiting for me when I was there for Blackey Days.

There’s someplace that has pawpaw trees up north, and from what I have seen on the computer, they don’t even resemble what pawpaws should look like.

My mom would say these are ‘brought on pawpaws,’ meaning the trees are ordered from a catalog.

Once again my granddaughter Sarah Nottingham’s school, Beechwood, is having band competition! My daughter Anna Nottingham, along with Jessica, Katelyn and baby Kyle, and I all went to Berea to watch the bands. There were several bands competing, including Harlan and Hazard.

Beechwood came in first place, I am very proud to say.

Hazard placed in the top three. Hazard was the last to perform and it was getting cold so we didn’t stay for the last few bands.

Beechwood has won state championship for two consecutive years, and I really hope they can follow through for a third year.

Beechwood band has 104 band members. The group really works hard to achieve and accomplish all they do.

Saturday they will be going to Bowling Green, and this is the final competition Then Sarah will go into jazz band.

During a break of the band competition Anna and I took Kyle for a little walk and as we got to the concession stand Kyle wanted something to eat. Instead of reaching for a candy bar, Kyl who is 20 months old, chose a banana.

As we were letting him play for a little while, Kyle tried to do a cartwheel like he had seen some of the band performers do.

The trip to Berea was so beautiful as the trees were in a maze of color.

I was teasing Anna about just keep driving on to the mountains. The leaves are starting to fall in this area and before long everything will be bare.

I haven’t felt good this week so I haven’t been in touch with Gwen Huff Farmer. I hope she is doing alright.

My little sidekick Bennie Wiederhold’s kindergarten class went on a field trip to Brown’s Farm. Bennie really enjoyed the trip and even petted some animals.

Bennie brought home a small pumpkin. Now he wants a pumpkin pie made out of it.

Johnny and Ann Calihan, along with their daughter Carol and Ann’s brother Hubert Caudill, spent a few days in the mountains of eastern Kentucky. They were there just at the right time to see the peak of autumn foliage. Ann met up with several cousins and family members while they were there.

I do believe Gary Eldridge is influencing several people as Ann and her cousins went on a genealogy hunt. Ann was looking for a cabin that some of her relatives owned, Stiller Bill Caudill. As I was talking to Ann I pulled up the information on the computer so I am going to print a picture off for her to see.

I think I better get this started on its way.