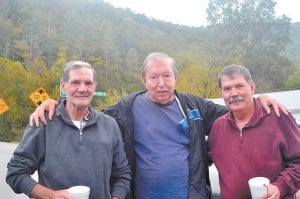 We ventured up to the hills of Letcher County last weekend to take in Blackey Days, Blackey being a little community situated on the banks of the north Fork of the Kentucky River that was once a robust business center complete with a railroad depot, hospital, school, churches, specialty stores, restaurants and all the other accouterments one might expect to find that define small town Kentucky.

Although it has gradually reduced itself to something more akin to “village” status over the last 75 years, Blackey still boasts a beautiful new public library, fire department, water department and at least three active churches. The old school and hospital have long been closed, as have all the retail businesses that thrived there when I was but a wee young lad.

My Uncle Stevie Craft used to say, “When they had the railroad station, you could start in Blackey and go anywhere in the country you took a notion to.”

Still, Blackey is very much alive today, thank you very much, and if anything, the sense of pride and community is more alive today than it was when I was growing up and it was, more or less, taken for granted. 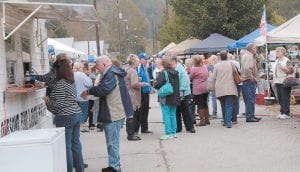 David Kinneer snapped this photo that showed just part of the large crowd that attended the Blackey Days Festival held last weekend. Columnist Ike Adams says he has his calendar marked already for next year’s festival.

I actually grew up on Blair Branch, some six or eight miles upstream from Rockhouse Creek’s confluence with the North Fork at Blackey.

When I was in college and people asked what town I was from, I told them, “I lived closer to Isom but Blackey felt more like home.” Of course nobody in Pikeville had ever heard of either one so I gradually started explaining that Whitesburg was the closest place they’d likely know about, but that it was 12 miles from my house to town. I didn’t live in town and never wanted to. And Blackey was the closest thing to a town that I might have been happy to call home.

While Blackey is now far less populated than it once was, it easily has a larger percentage of native sons and daughters scattered across the country, especially the industrial Midwest, who “come home” for Blackey Days than any other community I know that throws similar celebrations. Blackey Days is sort of a homecoming, family reunion and high school class reunion all rolled into one event. In fact, I saw several people there that I’ve never seen at one of the solo events even though they should have been. Live, mostly bluegrass, bands played music from just after sunrise until well after dark and a dozen or so vendors sold foodstuffs, handcrafts and a variety of souvenirs but most folks were simply there to renew old acquaintances and to simply feel at home. 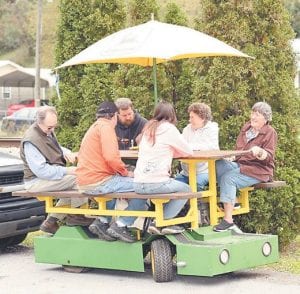 This rolling picnic table was a popular attraction during the Blackey Days festival. (Photo by Mary Adams)

I saw cars tagged from, Ohio, Indiana, Michigan, Illinois, Pennsylvania, West Virginia, Louisiana, Arkansas Tennessee and Virginia, but I’m betting that my brother, Keeter’s, high school classmate Roger Crase came the longest distance to get there because he had driven all the way from El Paso, Tex.

When Loretta and I spent two days driving to Houston last June, I remember seeing a road sign just after we crossed the Louisiana state line into Texas that read Houston, 136 miles, El Paso 861. That means that if Roger came home through Houston, he had to sit behind the steering wheel for nearly a thousand miles before he even got out of the state and he still had three or five Deep South states to contend with, after, that before he got anywhere close to Blackey.

Surprisingly my constant companion, Mr. Parkinson, who normally can’t tolerate big crowds or close contact, was on his best behavior. I had not shaken hands with as many men nor hugged as many women at one gathering since back in the late 1960s when a couple of my college buddies and I got hired to play music for what we called a travelling salvation show that had set up a huge tent for a weeklong religious revival in a big bottom across the river from downtown Pikeville.

But unlike that that old revival meeting, where I didn’t know a soul, lost or otherwise, I knew almost every person I encountered at Blackey Days this year. And even the faces I was unable to put a name with, looked familiar.

I’ve already found a 2016 calendar and the only thing I’ve reserved as a “must do” date is the second weekend in October because I’m already planning to be back in Letcher County for Blackey Days. Blackey may not actually be home, but it sure does feel like it.