Blackey is looking to grow

Officials say they're not opposed to annexing new areas 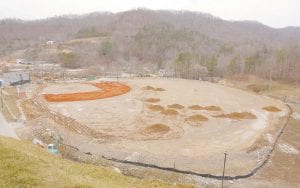 TAKING SHAPE – It could be a scene from the baseball move “Field of Dreams,” but it’s actually a photograph of the new baseball field which is taking shape at Letcher County Central High School. (Photo by Chris Anderson)

The City of Blackey will soon increase its size and population if an ambitious plan adopted by the Blackey City Council at its January meeting works out. In a unanimous vote, the council decided to begin annexing several areas surrounding the city in an effort to increase the population and make the city more viable as well as adding to its voice in county affairs.

Mayor Cathy Back introduced the proposal to the council and a crowd of enthusiastic residents from some of the soonto be annexed areas. Back told the council and audience that annexation would provide a larger pool of people to work on city projects and would add to Blackey’s ability to negotiate with county and state officials. She said the city could either proceed slowly and annex one or two areas at a time or try to do the whole thing at once.

Council member Joe A. Back agreed that Blackey needs to add to its population and suggested they begin by annexing areas where a number of people had already indicated their willingness to accept annexation. Mayor Back explained that the process would give people in areas being annexed the opportunity to speak out if they didn’t agree with the annexation.

Mayor Back said the process would begin with the council passing an ordinance of annexation and that from the day the ordinance is made final, residents in the proposed annexation area will have 60 days to voice their concerns. Those who oppose annexation can mount a petition drive to oppose it. Back said if 50 percent of the residents sign a petition indicating they do not wish to be annexed, the annexation will fail.

Several residents of the surrounding communities said the prospect of becoming part of Blackey was very attractive to them. When Mayor Back reminded them they would have to pay Blackey’s tax rate of $1 per household, Bernard Watts told the council he would not be opposed to paying higher property taxes it would enable to city to provide more services. Watts said he considered it a good arrangement to be part of the city.

“Why wouldn’t we want to be part of that?” said Watts. “I would be glad to pay the taxes if you raised them.”

Water was one of the motivating factors for many of those who are agreeable to annexation. Mayor Back said that while she couldn’t guarantee when anyone would be able to get on county water lines, she and the council would work with the Letcher County Water and Sewer District to see that lines are extended to every community in the surrounding area. Back reminded the visitors that the Water and Sewer District is responsible for getting water and sewer lines run throughout the county and that it makes the plans and sets timetables.

Council member Betty Watts said she originally had begun attending city council meetings to oppose paying city taxes and to question property boundaries, but is now a member of the city council. Watts said she has problems with offering annexation without being able to guarantee services and that she wants to be certain that people who are being annexed will have a say in the process.

“This is all part of bringing our community together,” said Mayor Back. “And it will give us a bigger voice, too.”

After hearing several council members suggest taking a stepby step approach to annexation, Back suggested the city begin by annexing parts of Elk Creek and Caudill’s Branch. She said the city will provide notices of the exact areas being annexed and post them in local businesses as well as city hall. Council member Mark Hogg moved to adopt Back’s suggestion and the vote was unanimous.

In other business, the council conducted the first reading of an ordinance to comply with Federal Emergency Management Agency Flood Insurance regulations. The council voted unanimously to adopt the first reading and will conduct the final reading at the February 7 meeting. The ordinance is on file at Blackey City Hall.

The council also discussed a proposed community center. Mayor Back told the council that the money for the center will be placed in the state coal severance tax budget by 92nd District State Representative Ancil Smith, whose district includes Blackey and much of western Letcher County. She said that if the annexation proceeds, the city may be able to come up with a better site than the city park for the center to be located. Fourth District Magistrate Keith Adams, who represents Blackey in the Letcher County Fiscal Court, told the council he would see that the money was placed on the fiscal court’s priority list. Back said she would also get in touch with 29th District State Senator Johnny Ray Turner about the project.