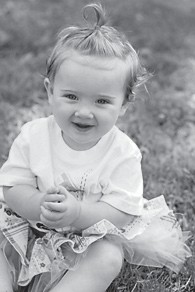 FIRST BIRTHDAY — Kylee Faith Gibson turned one year old on May 24. She is the daughter of Deidra and Sammy Gibson of Little Colley. Her grandparents are Wayne and Missy Fields of Cowan and Ellis and Margie Gibson of Linefork. She is the great-granddaughter of Allen and Sylvania Whitaker of Jeremiah.

Hello all! Long time no see. Well, I guess long time no write is more like it.

Yep, a cold during summer break. That’s certainly my luck. I’m feeling a little better now, so hopefully I’ll be as good as new soon.

Cody Adams, son of Randy and Liz Adams, and his girlfriend Stephanie blessed the family with a boy, Carter Layne, back in November. It has been a long time since I’ve had time to write, so I’m not sure I had mentioned the birth.

Megan Fleming, granddaughter of Bill and Evelyn Fleming, welcomed Elijah Scott ‘Eli’ Downey at the end of March, I believe. This is Bill and Evelyn’s first greatgrandchild and they are over the moon.

Bill and Evelyn’s son Shawn and his wife Jacqui also blessed the family with a bouncing baby boy. Jaxton Garrik Cade was born at the beginning of April.

Jocelyn, daughter of Laramie and Lynn Adams, and Dennis Watts’s new blessing is a beautiful girl whom they named Malarie Addison. She came into this world at the end of April. She is absolutely gorgeous and has the most hair I have ever seen on baby. Malarie has an older brother, Dylan. If he is anything like my boys, I bet he can’t wait until she is old enough to teach her how to get into trouble.

Lyndci and Adam Gilliam’s little girl, Sadie Layne, arrived in the middle of March. She has the most beautiful eyes. Lyndci is the daughter of Jerry and Bonita Adams, granddaughter of Ellis and Ila Adams.

Braylen Liam made his way into this world on May 18. He is the brand new son of Junie and Shequeenia Whitaker, grandson of Johnny Roy and Tammy Whitaker and Teresa and Nelson Hopkins.

My nephew, Gardner Allen, and his wife Jessica Jent are expecting a little one at the end of October. This will be their third. We are beyond happy for them. They recently moved to Knoxville and we sure are going to miss having them and the babies close by.

My great-niece, Kylee Faith Gibson, turned one year old on May 24 and celebrated her birthday with a pink John Deere party. The decorations were very cute with all the pink and green. Bonnie Adams made an amazing cake for her. Kylee is the daughter of Deidra and Sammy Gibson, and a granddaughter of Wayne and Missy Fields and Ellis and Margie Gibson.

Jake and Wilma Halcomb moved to the Hazard Nursing Home a couple months back and are doing well. Their daughter, Jamie Collins, says they love it there and are very happy.

Mom and Dad, Allen and Sylvania Whitaker, spent Saturday evening at the Litt Carr campground with my sister Missy Fields and family. Sunday, they attended church at Kingdom Come were happy that some of our family was able to attend as well.

Mom has had a lot going on over the past couple months, that is why I have been on writing hiatus. She was having a lot of pain in her back and ribs and was smothering really bad.

We thought she may have pneumonia again, but it was fluid in her lungs. They admitted her to the hospital and attempted to pull the fluid from her lungs with dialysis, but it was too much for her and caused her to have problems with her heart racing.

She had an opportunity for a transplant, but due to her heart complication at the time, they didn’t feel it would be safe to operate and moved her to inactive on the transplant list.

This was devastating news to our family as well as Mom. Thankfully, after a cardio work-up, she has been cleared by the cardiologist.

She did not have a heart attack and her heart is fine. They had to pull the fluid from her lung with a needle, and since the procedure she has been doing much better.

Thank God, she is now back on the active transplant list.

Missy, Opal, and I got in touch with the living donor transplant coordinator and offered to donate Mom a kidney. Even though Mom is hesitant to accept one from us, we wanted to do what we could to help.

After we submitted all the initial paperwork, Opal has been chosen to be the first one tested. This can be a very long process and we aren’t guaranteed to be a match even though we are her daughters. She will remain on the active transplant list waiting for a donated kidney as well.

Lord willing, she will get a kidney soon either from us or a donor.

Dad, well, is Dad. He is Whitaker to the bone and stubborn as a mule, but I wouldn’t have him any other way.

Personally, I don’t know a thing about being stubborn. Just ask anyone. Ha!

I stay on to Dad continuously to quit smoking but he pays little mind to what I have to say about that. He has some problems with his allergies and sinuses but otherwise he is OK right now.

David Allen and Joy Faye Blair came to visit with Mom along with Charles E. Blair during Memorial Day weekend. We were so happy to spend some time with them at our cookout.

Charles E. hasn’t been well. He recently had a mild heart attack and had to have surgery due to blockages. I believe his daughter, Tracy Snowden, said he had three stents put in.

He is home now and doing a little better. I’m very thankful he is OK as he sure gave us a scare.

Opal was telling me that Joyce Ison is to have hiatal hernia surgery once she is strong enough. Due to half of her stomach being up into her chest, she hasn’t been able to eat for some time now and is having to drink nutritional shakes to help build up her strength before they can do the procedure.

Haston Whitaker had a knee replacement and after some physical therapy he is home and doing well, according to his daughter Annette.

Ellis Adams is in hospital at Whitesburg. I’m not sure exactly what is wrong, but I hope he recovers quickly.

Calvin and Lori Adams as well as Margie Blair Caudill were baptized last weekend. Mom and Dad attended the baptism.

I could never remember to mention every single name I missed while away. So if I missed you, I am sorry and I hope you had a great birthday. I’ll just get a fresh start with the birthdays in June.

Happy birthday to each of you! I hope your day is filled with all the love and happiness in the world.

Happy anniversary to Chalena and Robbie Williams on June 5. I hope you have many more love filled years together.

I ask that everyone keep Derrick Amos Watts and his girlfriend Krystal Michelle May in your prayers, as well as the rest of their families. I know this is a really hard time for them all.

If I have left anyone or anything out, just let me know and I will be glad to get you next time. I hope everyone has a healthy and happy week.

If you would like to contact me, feel free to give me a call or you may email me at: alanacouch@hotmail.com.