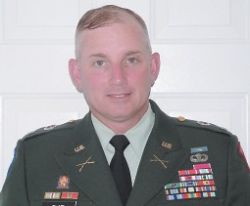 Lt. Col. Tim Blair, son of Doreen Calhoun of Blackey and the late Bernard Blair, has retired from the Army after serving 20 years.

Blair was commissioned an infantry officer after his graduation from Morehead State University in 1988. During his Army career, Blair served in numerous places throughout the United States and overseas. He was working in the Pentagon on September 11, 2001, and participated in Operation Restore Democracy in Haiti and Operation Iraqi Freedom in Iraq.

Blair retired April 1 and is now working with the United States Army Recruiting Command at Fort Knox as the deputy director for marketing. He is living in Rineyville, Ky., with his wife Jennifer, son Brady and daughters Bethany and Bailey.