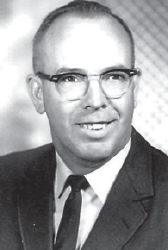 Born at Jeremiah, he was a son of the late Ben F. Blair Sr. and Belvie Watts Blair. He was a brother of the late Lillie Blair, Lincoln Blair, and Loretta Adams.

Funeral services will be held at 11 a.m. today (Wednesday) at Everidge Funeral Home. Burial will be in Cumberland Memorial Gardens Cemetery at Lilly.