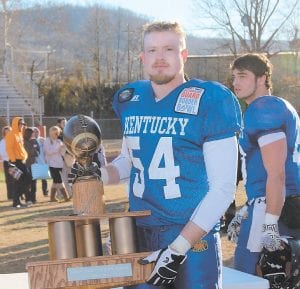 Zane Blair, who recently completed his senior season at Letcher County Central High School, holds the trophy presented Saturday to the Kentucky All-Stars after their 33-32 win over the Tennessee All-Stars in the annual National Guard Border Bowl, held this year at the University of the Cumberlands in Williamsburg, Ky. Kentucky’s win in a game that is being called the Border Bowl’s best yet evens the series at 4-4.