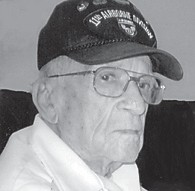 Funeral services for Willard M. Blankenship, 95, North Augusta, S.C., who entered into rest December 11, 2016, will be conducted Wednesday morning at 11 o’clock from the Posey Funeral Chapel in North Augusta, S.C. Interment will follow in the Sunset Memory Gardens with full military honors.

A native of Burdine, he was a son of the late Clarence and Sadie VanHorn Blankenship, having made the North Augusta-Beech Island area his home for the past 56 years. He was retired from the U.S. Army with 22 years of service, having served in World War II and the Korean War, and was later retired from the E.I. DuPont Company at the Savannah River Plant.

During World War II he served in North Africa in 1943, then volunteered to go into the CBI Theater. When the Burma Campaign ended he served in China as an advisor to the 18th Chinese Field Army. During the Korean War he served in the Airborne making jumps in Korea.

He retired at Fort Gordon having served in the Signal Command as a chief instructor. He received the Master Jumper Award with Two Stars and holds the Combat Infantry Badge with Second Award.

Mr. Blankenship was a life member of the Hopewell Masonic Lodge #127 AFM and a Shriner and a life member of VFW Post #6740, the American Legion Post #63, the East- ern Star Chapter #238, the 6th Field Association, the 608 Tank Association and the 187th, the 11th and the 82nd Airborne Association.

Posey Funeral Directors of North Augusta, S.C., has charge of arrangements. Visit the registry at www.poseycares.com.