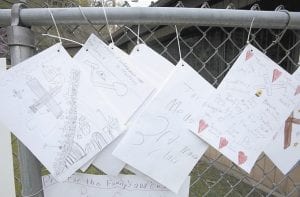 Letters, drawings and well-wishes by school children were hanging on a fence at a makeshift memorial in Whitesville, W.Va., on Tuesday (April 13) for 29 miners who died in the explosion at Massey Energy Co.’s Upper Big Branch mine in Montcoal, W.Va. a week ago Monday. Workers were able to remove the bodies of the last 9 miners from the mine earlier on Tuesday morning. (AP Photo/Amy Sancetta)

Massey Energy could see where the demand for coal was coming from. So, it made a $1 billion bet that it could cash in on the burgeoning economies of Asia.

Now, for this powerful company in Appalachia, the deadly explosion at one of its mines in West Virginia could hamper its expansion plans, be a drag on earnings and bring additional scrutiny for a coal miner already accused of putting profit ahead of workers’ lives.

Last week’s explosion at the Upper Big Branch mine in Montcoal, West Virginia, killed 29 miners in what is the worst mining disaster since an explosion in Leslie County, Ky., in 1972.

The mine produces metallurgical coal used by steel makers. That kind of coal that generates bigger profit than the more common thermal coal used by utilities to make electricity.

The Chinese and Indian economies have rebounded from the recession much faster than other parts of the globe. Both countries need to import metallurgical coal to make steel for cars, bridges and appliances used to feed their growing economies. Thatdemand has pushed up prices for metallurgical coal to about $200 per ton, double from where they were a year ago.

So, while demand in the U.S. remained suppressed, Massey embarked on an expansion to double the production of metallurgical coal by 2012 to 20 million tons. Massey, based in Richmond, Virginia, announced last month that it bought rival Cumberland Resources for $960 million. (Cumberland Resources has extensive reserves in the Cumberland River area of Letcher County.) Massey also wants to invest $160 million to develop a southern West Virginia operation capable of producing 2 million tons of metallurgical coal annually. And it has agreements to work on coal projects with two Indian steel companies.

“We believe the current and forecasted shortage of metallurgical coal makes this the right time to bring on additional production,” Massey’s Chairman and CEO Don Blankenship said when the company released its fourth-quarter financial results in February.

The fate of the Upper Big Branch mine, which produces about 1.2 million tons of coal a year and represents about 3 percent of Massey’s coal sales in 2009, is still undetermined. It will shut down for at least a few months while federal investigators determine what happened.

“I wouldn’t expect it to be significant in the long term,” Blankenship told The Associated Press.

“We haven’t focused on that because that’s not the important thing now.”

Still, it does figure to slow the company’s big plans to take advantage of overseas demand for coal.

The explosion and shutdown of the mine will draw additional scrutiny from inspectors and that could hinder production at other Massey operations where there already are complaints about unsafe conditions. The company’s mountaintop mining practices also have drawn criticism from environmentalists.

Ratings agency Standard & Poor’s pegged the loss of production at $50 million a year to earnings before income taxes, depreciation and amortization and said Massey is likely looking at a near-term expense of under $10 million.

Massey’s stock was hit hard immediately after the April 5 explosion, falling 17 percent. It rose 2 percent by the week’s end.

Other mining companies hit with similar situations have continued to do well. Some have permanently closed the mine where the disaster happened; in other cases the mine ultimately reopened.

International Coal Group closed the Sago mine in Buckhannon, West Virginia, after 12 workers were killed in an explosion in 2006. The company said the mine was no longer viable and recorded a $7.2 million charge.

The Crandall Canyon mine in Utah operated by a subsidiary of Murray Energy shut down after a cave-in killed six miners and three rescuers in 2007.

In 2006, two miners were killed in a fire at Massey’s Aracoma Alma No. 1 mine in West Virginia. Massey settled a wrongful death lawsuit for an undisclosed sum, and its subsidiary paid $4.2 million in civil and criminal penalties. That mine reopened.

“All these situations are diff erent,” said Carol Raulston, spokeswoman for the National Mining Association.

As one of the nation’s biggest coal producers, Massey may be able to count on other mines to make up for the production at Upper Big Branch. Insurance can mitigate costs.

The explosion comes at a diffi cult time for coal mining companies.

The recession has sapped demand for coal. Utilities are using more cheap natural gas to produce power. And Congress is studying proposals that could limit emissions of greenhouse gases, which could further dampen demand for coal.

The Harlan Daily Enterprise
reported this week that Black Mountain Resources Vice President Ross Kegan sounded optimistic about the company’s future in a speech Monday before a combined meeting of the Tri-City and Harlan County chambers of commerce.

“The company is staying intact. Our intention is to continue doing what we’re doing,” Kegan said. “Massey expects an expansion.”

According to Daily Enterprise
reporter John Henson, Kegan touted Massey’s “big marketing department” as a benefit for Black Mountain Resources, noting that could help the company expand its sales overseas. Kegan said approximately half of the company’s coal reserves meet the standards for metallurgical coal.

“It’s our intention and Massey’s stated intention for us to continue doing what we are doing, and their desire has been for us to actually expand,” said Kegan, of Jenkins. “One good thing that we see coming out of this is that Massey is very experienced at marketing coal internationally and we are not.”

Ayers said Black Mountain Resources employed approximately 600 people at 14 mines (some of them in Letcher County) and has helped financially with numerous projects around Harlan County.

Both Ayers and Kegan said the media has unfairly targeted the mining industry for criticism with Kegan noting that mining was “under assault,” the Daily Enterprise
report said.

Comptroller Thomas DiNapoli, trustee of a retirement fund holding more than 300,000 shares of Massey stock worth $14 million, on Monday called for Blankenship to resign immediately as chairman of Massey’s board. DiNapoli said the company failed to adequately manage risks at the West Virginia mine where the 29 died.

A similar challenge came from William Patterson, executive director of the Washington, D.C.- based CtW Investment Group, which works with union pension funds.