‘(Bleep) My Dad Says’ tries to move past novelty status 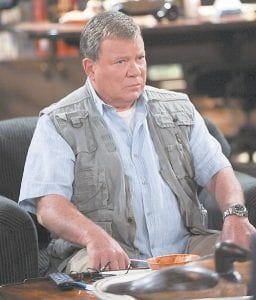 William Shatner is shown as Ed Goodson in “$#*! My Dad Says,” based on the popular Twitter site by Justin Halpern. (AP Photo/CBS)

Justin Halpern knows that not everyone is supportive of a guy fortunate enough to turn a Twitter feed into a best-selling book and a prime-time network sitcom.

His good luck instantly breeds hostility, he says, “and it’s kind of a justified feeling because it’s just a Twitter page.”

Hits on the Web haven’t typically transferred well to TV (see “quarterlife”), but Halpern might be an exception.

His Twitter feed, “S— My Dad Says,” amassed a huge following (now more than 1.7 million followers) simply by quotes he relayed from his 74-year-old father, Sam Halpern, a classic curmudgeon with a penchant for expletives.

His similarly titled book debuted on The New York Times
list of best sellers. Then, the CBS sitcom starring William Shatner as Halpern’s father premiered to 12.5 million viewers, more than twice that of “30 Rock,” its much more acclaimed 8:30 p.m. Thursday competition.

Ratings for “(Bleep) My Dad Says” (the Twitter feed’s title was changed for the CBS show) have since declined each week and reviews have been bad. But the show hopes it has cast off its novelty label and become one of the few Internet-to-TV success stories.

It hasn’t been a smooth ride. The pilot, produced by Warner Bros., had to be reshot, and the part of the son was recast with Jonathan Sadowski. The changes may have improved things, but critics were still unimpressed. The
New York Times,
for one, called it “a bad idea from the moment it was announced” and “a wholly generic sitcom so divorced from its source material that you have to pinch yourself.”

The show is oddly old-school in its reliance on sitcom tradition. But to a certain extent, the Twitter feed that started it all was classically sitcomish: There’s no more familiar TV trope than the crabby father.

One of the ingredients that set Halpern’s Twitter feed apart was its vulgarity. His father’s musings and advice are harsh. One of few examples without an offensive word: “Pressure? Get married when you want. Your wedding’s just one more day in my life I can’t wear sweat pants.”

Halpern ended up living with his parents in San Diego after he got a job with Maxim.com and his girlfriend unexpectedly dumped him. In the book, he fleshes out the details of his life and his relationship with his dad, whom he describes as “the least passiveaggressive human being on the planet.”

“I had no idea what to expect,” he says. “It was just funny to tell my friends, ‘Look at all these people that follow what my dad says.’”

Halpern believes the book gave him some credence and “changed a lot of people’s minds about how that jump can work,” referring to the transfers from the Internet to television.

The most notable change in the adaptation was sanitizing the vulgarity. The character based on Halpern, too, was turned from merely a bemused onlooker into a son craving love and sympathy from his father.

Shatner calls the curious origins of the show “a viral miracle.”

“I went with the magic of the Twitter and the wonderful reputation of (Mutchnick) and (Kohan),” says Shatner. “It turned out that their reputation was well deserved and it seems magic has hit.”

Post-premiere ratings have suggested trouble, though. The audience for the second episode dropped nearly 18 percent to 10.44 million. The third episode was seen by 9.8 million. That’s still a very large audience for modern network television, and if “(Bleep) My Dad Says” stayed there, it would be one of the hits of the fall.

Shatner describes the show (which recently shot its eighth episode) as trying to achieve a balance between honest relationships and the need for a laugh every 30 seconds.

“I feel that we can build an audience by sustaining and increasing the quality of our show,” he says.

Halpern says they’re “figuring out what the show is” and he believes the ratings will hold. The journey from Twitter to TV, he says, only works if it’s an accident.

“It can work if you just make stuff that you enjoy and think is funny,” Halpern says, “not for the purpose of, ‘If I put together the perfect cocktail of marketable ideas I’ll be able to make money.’ I think that’s when it never works.”