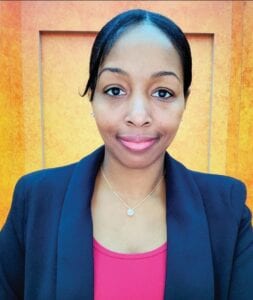 QUINTISSA PEAKE of Fleming is an outspoken advocate for people with sickle cell anemia.

While some people worry about giving or getting a pint of blood, Quintissa Peake is celebrating a year since receiving her 500th pint of blood.

Peake, of Fleming, has sickle cell anemia, a genetic disorder that causes normally round red blood cells to be sickle shaped. They hold little oxygen, and can stick together, causing episodes of severe pain and risks of stroke and heart attack.

“The pain is like the red flag — hey something is going on. That’s when I know I have to get something done,” she said.

That something is usually a transfusion. She has had them her whole life, and will likely have them again. The disease has caused her to have several mini-strokes, called TIAs, and can manifest at any time.

“I was diagnosed at 11 months old, and I’ll be 40 this month,” she said. “Back in the ‘80s, they didn’t have a long life expectancy for people with sickle cell. They died in childhood or in their early 20s, so I’ve made it twice as long.”

With the pandemic raging around her, Peake has even more to worry about. She said she wears a mask whenever she leaves home, and has been social distancing long before COVID-19 was discovered.

“Before in cold and flu season, I would be more careful. Definitely with COVID going around, I am more careful,” she said. “Handwashing, hand sanitizer — those have just been skills I’ve sort of practiced all along.”

Sickle cell is a genetic disorder, and manifests when each parent passes a recessive gene on to one of their children. Peake’s mother is one of 14 brothers and sisters, none of whom have sickle cell. None of their children have it. Peake’s father, siblings, nieces and nephews don’t have it.

Some children receive the Hb S gene from one parent and the Hb C gene from the other, in which cases sickle cell symptoms are less severe, and a person with that pairing may go for years without realizing they have the disease. Peake has two copies of the Hb S gene, the more severe type of the disease. Sickle cell was long thought to be a disease that only struck Blacks. Scientists have now discovered that anyone can suffer from the disorder, if both of their parents pass on the recessive genes to a child. About one in 400 people worldwide have sickle cell.

“Greek, Pacific Islands, Mediterranean, other European cultures – I have friends on Facebook who have blond hair and light skin who look nothing like me, but they have sickle cell,” she said.

Peake’s outgoing nature has made her somewhat a star in the world of sickle cell anemia and a related disease called thalassemia. She was the U.S. representative for World Thalassemia Day, and is a former ambassador for the Kentucky Blood Center. A Tweet she wrote in support of getting a vehicle donated for emergency delivery of blood was seen and retweeted by former University of Kentucky basketball star and now Houston Rockets point guard John Wall, and the blood bank got its vehicle.

She notes in her presentations that blood does not have a racial component, meaning any person of any color can donate their red blood to anyone else who needs it and has the same blood type. She said that point was illustrated by a woman who approached her a few years ago at a blood drive to tell her she had been inspired to donate blood for a 15-year-old boy who had a severe accident and needed 16 pints of blood. The woman was among those whose blood was given to him, and who were invited to the hospital so the parents could thank them. The boy, who eventually recovered, was white. The blood donor was Black.

“Isn’t it so interesting, once you get down to it, there is more that connects us than separates us?” Peake said.

While Peake and others with sickle cell have long relied on blood transfusions and bone marrow transplants to fight the disease, new gene therapies are being approved now that may one day make those bouts with pain a thing of the past. Peake’s two sisters are not bone marrow matches for her, so in the past she would have to go on the transplant list. With gene therapy, that may no longer be necessary. With the new treatment, the transplant comes from their patient after being genetically modified in a lab.