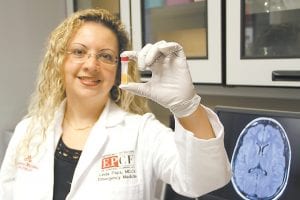 This photo shows Linda Papa, MD, MSC, an emergency medicine physician at Orlando Health in Orlando, Fla. New research bolsters evidence that a simple blood test may someday be used to detect concussions and other brain trauma. The study involved patients treated at the trauma center and the results are preliminary, a concussion blood test based on the proteins studied or on biomarkers other researchers are investigating is likely years away from routine use. (Orlando Health via AP)

New research bolsters evidence that a simple blood test may someday be used to detect concussions.

It suggests that a protein linked with head trauma may be present in blood up to a week after injury, which could help diagnose patients who delay seeking treatment.

The study involved patients at one hospital in Florida and the results are preliminary — a concussion blood test based on the two proteins studied or on other so-called biomarkers under review is likely at least a few years away from routine use.

But the new findings “are a substantial step” in developing a test that could be used in broad settings, from the battlefield to sports events and doctors’ offices. That’s according to an editorial published with the study this week in JAMA Neurology.

Dr. Ramon Diaz-Arrastia, co-author of the editorial and a researcher at the government’s Uniformed Services University of the Health Sciences, said it’s likely that several biomarkers will be found to be useful for diagnosing concussions, “each of which will tell us something slightly different” about the injury.

Dr. Linda Papa, an Orlando Health emergency medicine specialist and colleagues tested nearly 600 adults treated at Orlando Regional Medical Center. About half had concussions from car crashes, falls, sports and other activities. Most were mild, with symptoms that included loss of consciousness, amnesia or feeling disoriented. The rest of the adults had fractures or other types of non-brain trauma.

Blood samples were taken starting four hours following the injury, then periodically for seven days. The tests measured two proteins nicknamed GFAP and UCH-L1, which are present in brain cells. In a head injury, the proteins can leak into the bloodstream, Papa said. Other research has shown blood levels of the proteins are highest with the most severe injuries.

Levels of the UCH protein rose quickly but declined substantially within two days, while GFAP levels were detectable during the week following injury.

Many concussion patients put off going to the doctor because they think the injury isn’t serious, but end up seeking treatment a few days later when symptoms persist, Papa said. She said blood tests could help diagnose these patients, and could help determine whether neurological testing or other medical treatment is needed. Typically doctors advise rest from work, school and other taxing activities until after concussion symptoms have disappeared.

Dr. Walter Koroshetz, director of the National Institute of Neurological Disorders and Stroke, called the data encouraging and said finding an easily detectable biomarker for concussions is “the holy grail for head injury” research. His agency paid for the study and the U.S. government has spent millions of dollars on concussion research.

More than 2 million people nationwide get emergency room treatment for concussions and other brain trauma each year. Damage may not be visible on imaging tests so doctors typically rely on symptoms. Diagnosis is important because repeated head blows have been linked with lasting memory problems and potentially a degenerative brain disease found in some retired NFL players.

Southern Illinois University neuroscientist Michael Hylin noted that some concussion symptoms, including dizziness and fatique, can also be caused by dehydration, which is another threat to athletes involved in rigorous sports. A test that could distinguish between the two conditions would be useful to help guide treatment, he said.

Papa noted that there are blood tests to diagnose problems with other organs, including the heart, liver and kidneys, “and now we’re really coming close to having something for the brain.” She is an unpaid scientific consultant for Banyan Biomarkers, Inc. The Florida company announced earlier this year that is working with Royal Philips to develop a hand-held device that would analyze blood samples and display results within minutes showing if the proteins are present.